Where does it belong?
By Erika M Szabo
https://www.authorerikamszabo.com 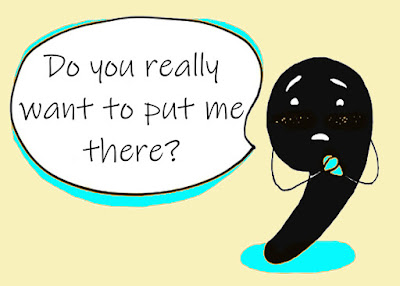 I learned English as an adult and the comma became my worst nightmare when I started writing.
Where it's needed and don't need it?

I rely on the editors to catch my mistakes, but I really should use my cheat-sheet more often. I bet my editor would have fewer headaches.

Read the first part of my cheat-sheet here:
https://asmallgangofauthors.blogspot.com/2019/03/that-pesky-comma-by-erika-m-szabo.html

Use a comma to separate each element in an address. Also use a comma after a city-state combination within a sentence.
I work at 234 South Street, New York, 10045.

You don't need to add a comma when the sentence mentions only the month and year.
March 2019 was a strange month.

Use a comma when the first word of the sentence is freestanding "yes" or "no."
Yes, I saw a fox when I went running.
No, the fox didn't bite me.

Use a comma when directly addressing someone or something in a sentence.
My boss often asks, "Cathy, did you read the new policy yet?"

Use a comma between two adjectives that modify the same noun.
I saw the big, mean fox when I went running.

Use a comma to offset negation in a sentence.
I saw a fox, not a baby seal, when I went running.

Also use commas when any distinct shift occurs in the sentence or thought process.
The cloud looked like an animal, perhaps a baby elephant.

Use commas before every sequence of three numbers when writing a number larger than 999. (Two exceptions are writing years and house numbers.)
10,000 or 1,304,687.

Read the first part of article about the Pesky Rules:
https://asmallgangofauthors.blogspot.com/2019/04/the-pesky-rules-1.html

Next week we'll talk about "its versus it's", "then versus than", "nor versus or" and many other pesky rules. Don't miss the post!

Yesterday was a great day, my book trailer video was chosen to be on of the winners in the Bookish Video Contest: