There is a new release on Mann's house, and that doesn't just mean that I have written a new novel, but I have also experimented something new, a historical fiction.


Aquila et Noctua (The Eagle and the Owl) comes from a story I wrote many years ago and brings me back to one of my loves in life: History, and particularly the history of Ancient Rome.
The story tells about a young slave, Saul, coming from Jerusalem, and the complicated relationship he will develop with his masters and with the other slaves, who will become a sort of surrogate family; the one he lost once he was enslaved.
Once again, like in my debut novel "A Tale of a Rough Diamond," we have the themes of envy, jealousy, conflictual relationships within the family, and wisdom.
Wisdom is depicted in this case like the Noctua (Owl), and like in nature happens, the owl is going to bring wisdom, with sudden chaos.
The Aquila, (Eagle) represents the Roman Empire and the family who will purchase Saul. 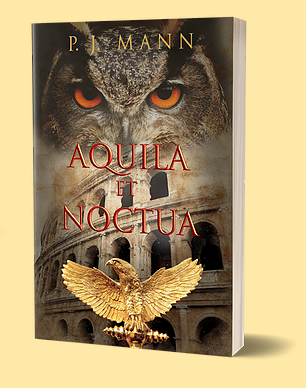 There is going to be a Release party on my Facebook page:
https://www.facebook.com/events/2225782511045126/
It is scheduled for Sunday 1.9  at 10:00 AM EDT and there will be other authors to help me celebrate the release. If you have more questions about this new release this is the right time to have them answered.

EXCERPT:
​The sun shone brightly in the sky on that late summer day. The successful campaign in the territories of Palestine brought new glory to the Empire and filled every corner of the city with celebrations.
The massive military action, planned by Emperor Hadrian, had brought about the final defeat of the rebellious Jews in the third Jewish revolt.
Jerusalem was renamed Aelia Capitolina in honor of the victorious emperor and as an ultimate humiliation to the rebels. The prisoners were sent all over the Empire to be sold as slaves while the Roman generals and commanders were decorated in the public square of the Forum.
It was a joyful period throughout all of Rome, and it should have been no exception for Marcus Tiberius Numida. However, something weighed heavily on his mind and alienated his soul from the revelry.
He wandered through the streets of Rome, not paying attention to where he was going until he found himself in the slave market in the Forum.
Several specimens of males and females, crammed into cages, peered from between the bars, waiting to be yanked out and pushed to line up behind the merchant. Their eyes revealed fear and confusion
Each merchant touted the good properties of each slave they were selling, wildly gesticulating to underline their words to attract customers, as crowds of curious people and potential buyers gathered around.
The sobs of the waiting slaves and the clang of their chains against the bars, combined with the din of the curious onlookers and the raucous voices of the merchants. The stench of bodily fluids melded with the scent of food that was sold in the square.

To pre-order the novel, please follow this link:
https://www.amazon.com/dp/B07VXB2QFR

I hope I have attracted your attention and see you soon at the release party!
Stay tuned!