Mythology and Folklore: Part One By Erika M Szabo 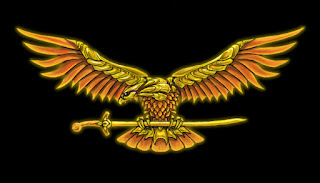 Picture credit: https://www.deviantart.com/tag/turul
The great mythical Turul bird of prey is one of the most important symbols of the Hungarians. The origins of the Turul legendry go way back to prehistoric Hungarian past. It is the relic of the ancient Hungarian faith, the embodier of the powers above and the monarchic sovereignty, the national symbol of the providence and guidelines. It is the ancient symbol of national identity.

It represents God's power and will. The Turul was seen as the ancestor of Atilla, and it was also the symbol of the Huns. The Hungarian Turul is often represented carrying the flaming Sword of God.

The legend of Emese 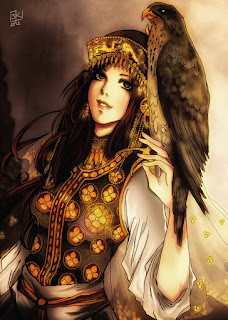 Picture credit: https://www.deviantart.com/art/Emese-327590326
A Hungarian legend tells the story of Emese, wife of Ügyek the descendant of Atilla, who once had a dream in which a Turul appeared to her. In this dream, a crystal-clear stream started to flow from her, and as it moved Westward, it grew into a mighty river. This dream represented her symbolic impregnation by the Turul, and meant that she would give birth to a line of great rulers. Emese later gave birth to Álmos, who was the father of Árpád, the great leader of the Magyars and founder of Hungary. This story reaffirms the Hun-Magyar kinship, and the knowledge that the Magyars reconquered Hungary as their rightful inheritance from Atilla's great Hun Empire. 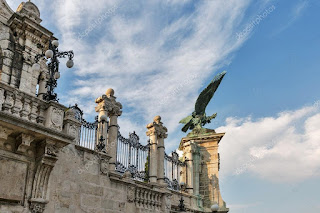 Turul eagle near Buda Royal Palace entrance gate in Budapest, Hungary — Photo by panama7
There were 3 large Turul statues, each with a wingspan of 15 meters, in Greater Hungary (before the country had its borders reconfigured by the Treaty of Trianon). The last of the three stands on a mountain near Tatabánya, Hungary, but the other two were destroyed. It is the largest bird statue in Europe and the largest bronze statue in Central Europe. There remain at least 195 Turul statues in Hungary, as well as 48 in Romania (32 in Transylvania and 16 in Partium), 8 in Slovakia, 7 in Serbia, 5 in Ukraine, 1 in Austria. One of the most recently erected, as of 29 September 2012, on St. Michael the Archangel's Day, is in Hungary's Ópusztaszer National Heritage Park.
Some of the Kingdom of Hungary postage stamps issued after 1900 feature the Turul.


The Turul in my stories 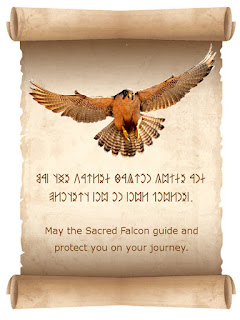 I lit the sacred candles infused with herbs and then placed them in a silver candle holder on a small round table. The ancient wooden male and female figurines holding hands stood between the candles, with our delicately carved Turul bird with a crown on its head and a sword in its talons. The Falcon held widely stretched wings over the figurines as if protecting them.
The statues had been in my family for centuries, they were small, and had a deep, warm brown color. The rich, shiny brown hue came from the hot herbal tea Elza poured over the statues every morning, as my ancestors had done for generations. Beside the statues was an ancient, dark leather-bound book. Its permanent place was on the Prayer table, and every Hun family had one. I had leafed through our book many times. The first few pages remained empty to me, but the rest of the book contained my ancestor’s names and achievements, written in ancient handwriting. Mom had said when I asked her about the empty pages, “The Book will reveal all its secrets to you, but only when you when you reach the age of maturity.” I wondered if I were ready; I was entering into Hun adulthood after all, so I made a mental note to check the book the next day, after prayer time.
Elza wrapped the ceremonial shawl over my shoulders as I took a deep breath and held my hands above the table. I began the prayer by reading the Hun writing, carved into the leather cover of the book of my ancestors. Following the ancient traditions, we prayed as a family in the morning to the First Mother and Father, and we prayed to the Creator at night, in solitude.
Mother and Father leading in unity,
Protected by the Turul for eternity,
Guide my soul and keep my body healthy.
Test my courage and try my patience,
Let me prove I have endurance.
Let compassion always guide me,
Make me wise to help the needy.
Challenge me on my daily journey,
And give me the strength to prove I’m worthy.
Closing my eyes, I held my hands in silence over the table for a minute and embraced the serene feeling I always had while saying the prayer. Warm energy flooded my insides, and I experienced a deep connection to something powerful, majestic and welcoming. 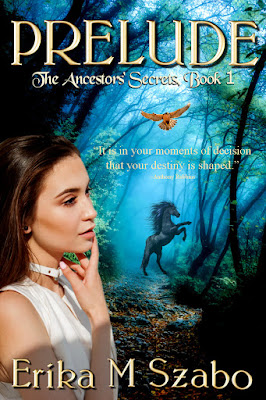 https://www.amazon.com/dp/B07D6ZVGYM
When a young doctor, Ilona, starts to develop unusual powers, her life and her beliefs change. Thrown into a world of clan mysteries, traditions and secrets, she begins remembering her mother’s instructions concealed as rhymes.
Punished by the ancestors long ago, Mora has waited centuries for the chance to reunite with her beloved Joland. Now, she seeks to gain the power to rule the ancient clan with a strict hierarchy and deadly laws that still exist hidden among us.
Ilona has been chosen by the ancestors to stop Mora and save the future of the clan.
Her birthright as a Healer runs alongside her desires as a woman. She has been in love with her best friend but is also drawn to the stranger who appears in her peculiar dream.
Ilona must save herself and her family from Mora’s evil plans, uncover ancient tribal secrets, and find her Destiny Box… the box that contains the message of the Ancestors.
Does she have the strength to fight evil? 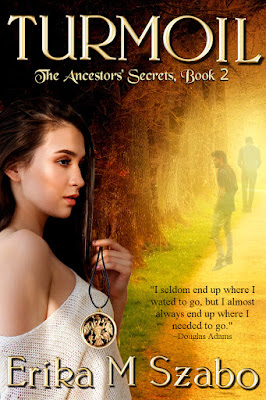 
After her twenty-ninth birthday, Ilona’s life was turned upside down. She learned more about her ancestry and herself in three days than in her entire life.
Mora sends a man to destroy Ilona. His hateful, cold stare sends icy chills down the spines of all who see him. Ilona is no different. She feels a foreboding of evil and senses a dark force commanding him to destroy her.
Ilona loves both her best friend and the stranger in her dreams, but which one is her true love?
In her quest to protect her family and the future of the clan, Ilona must activate her Chameleon side to obtain unimaginable powers. She can use her powers for absolute good or absolute evil; the choice is up to her.
Does she have the strength to fight evil?


Can she keep her sanity when discovering her magical abilities? 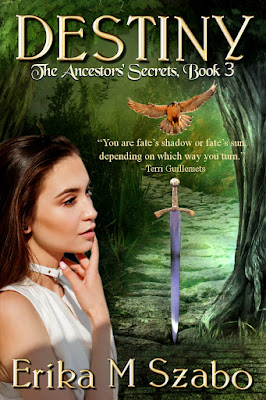 
Ilona is a doctor and heals people, but the healing powers she inherited and the magical abilities she obtains are exciting as well as frightening.
Mora desperately fights to stop Ilona from fulfilling her destiny and saving the clan’s future. But the evil Mora won’t give up her plan of changing the future and to gain power.
In the final book of The Ancestors’ Secrets Trilogy, Ilona travels through time from the early years when her people were nomads, to the castles of the 14th century, to present day as she struggles to overcome the obstacles placed in her path. She finds the Destiny Box that contains the messages of the ancestors.
Will Ilona accept her destiny?
Can she find true love?


Will she use her unimaginable powers for good or evil?
.
“This is so different from the usual fare churned out by ordinary writers.” -Valerie Byron
“The characters felt real, and the secrets are alluring. You will get hooked in right away.” -Brenda Barry
“Szabo introduces readers to a fascinating world of ancient rights conducted by a secret order.” -J.E. Rogers

Mythology and Folklore: Part One By Erika M Szabo
The Turul Bird by Erika M Szabo Picture credit: https://www.deviantart.com/tag/turul The great mythical Turul bird of prey is one of the most important symbols of the Hungarians. The origins of the Turul legendry go way back to prehistoric Hungarian past. I...
+
2
3
2
·
Reply

Wow Erika so cool to see where the symbolism in your book came from. I always wondered why you chose a falcon.
+
2
1
2
·
Reply

Although the series is not a history book, I used bits of historical facts in the story, and the Turul bird and the Sacred Sword are important part of Hun mythology.

I know :) You share your legends about Arthur and Merlin and I share bits about my ancestry. We always learn something new from each other

Brilliant post, Erika! I loved learning about the Turul Bird! Your heritage is a rich one, that is for sure. Thank you for sharing traditions and beliefs with us.
+
2
1
2
·
Reply

Join Erika Szabo as she begins her series on Hungarian myths and legends on Our Author Gang.
+
1
0
1
·
Reply

Good stuff; local legends and myths are always great to learn about.
+
2
1
2
·
Reply

Erika M. Szabo​ shares the story of the Turul bird and a snippet from her epic fantasy today. Stop by and check out her post.
+
2
1
2
·
Reply

I'm fascinated by the rich legacy of legendary creatures and peoples of the world. Thank you for sharing the Turul bird and a snippet of your epic fantasy!
+
2
1
2
·
Reply