Barbara G.Tarn had an intense life in the Middle Ages that stuck to her through the centuries. She’s a writer, sometimes artist, mostly a world-creator and storyteller. Two of her stories received an Honorable Mention at the Writers of the Future contest. She writes, draws, ignores her day job and blogs at: http://creativebarbwire.wordpress.com. She can now be found on Patreon, where you can pledge as little as 1$ a month to read exclusive content and sustain her and other creators in their endeavors. Check her Vimeo channel for book trailers and other funny stuff.

What inspired you to start writing?
Moving back to my home country in my early teens means I shut out the world and started daydreaming and writing down those stories. My first official story is from the summer 1978 and when I switched languages in the early 2000s I was already way over 500 titles in my mother tongue, Italian. Naturally, I was unpublished for over thirty years, but then I started writing in English and the Indie Revolution happened...

What genre do you write?
Since I hate this world, I write mostly SFF – well, fantasy of many kings. I have a science fantasy series (although I plan to write more sci-fi stuff this year), a fantasy secondary world with standalone books, a historical fantasy series, and even a few body switches stories (urban fantasy? Magical realism? Take your pick...)... 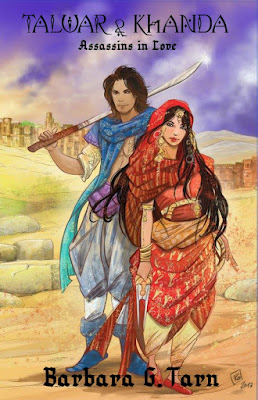 Excerpt: Talwar and Khanda
"A beautiful maiden with long brown hair sat on the edge of the central fountain and seemed to be competing with a bellbird as to who made the most musical sounds. Not a real song, more a melody, a humming, but he stopped to listen, enchanted.

When the bird didn't answer her, she felt his presence and turned to look at him. She had strange, ice-blue eyes – a very uncommon color in the southern lands. Her lips slowly curved into a smile.
"Hello, Ajay, I heard you were here, but you didn't come down to dinner last night," she said, rising to saunter towards him.

She was wrapped in a transparent blue veil and her short-sleeved, embroidered bodice covered her to her hips. A wide skirt came out from under it, both garments of cobalt blue fabric with golden embroidery. The veil had a golden ribbon around its edges and she wore gold jewelry – a multi-layered necklace of gold and sapphires, earrings and handflowers decorated with pearls, and golden bangles and armbands on her fair-skinned arms.

He gulped, speechless, as the beauty of her frame and her movements hit him. He couldn't for the life of him remember her name, although he should, since that eye-color... his thoughts scattered as she came closer and pretended to be ashamed.

"Oh, I'm sorry, you're currently nameless, aren't you?" she said. "Do you have an idea of what you'll be called tonight?"

He opened his mouth, but again no sound came out. He had no idea, and couldn't think straight. She was the most beautiful young woman he'd ever seen, but he couldn't place her among his childhood friends' faces. He shook his head, spellbound.