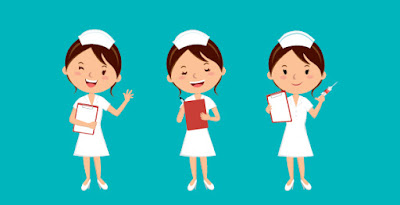 Picture credit
I've been a nurse all my adult life. Taking care of the sick is hard, challenging, yet the most rewarding profession. Sometimes I cry with the patients but sometimes it makes me giggle when things turn out funny because of a simple misunderstanding. 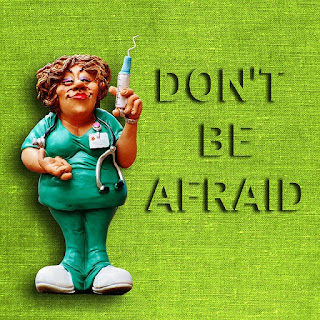 A man was brought to the ER, drunk out of his mind. His wife said he fell off the roof but luckily the bush he fell onto broke his fall and he got away with superficial cuts, scrapes and bruises. The doctor ordered a Tetanus boost, so I got the shot and went back to his stretcher.
As soon as he spotted the syringe in my hand, he started screaming, "You ain't gonna do that. No way! It's gonna hurt!"
I sighed and thought, here we go. I'm going to waste ten minutes to explain why he needs the booster and what could be the consequences if he refused to get it. Surprisingly, after only two minutes he agreed to have the injection.
But then came the hard part, "Wait until I'm ready!" He warned.
The ten minutes wasted anyway because every time I lifted my hand with the syringe in it, he shrunk back and yelled, "Not ready yet!"
I couldn't waste any more time, so I used an old nurse's trick. I signaled a nurse, she quickly assessed the situation and nodded, and then she walked over to me and whispered loud enough so the man could hear her, "Oh my God, look!" She jutted her chin toward the entrance door.
The man perked up, craned his neck to see and asked, "What's going on?"
It took me a second to give him the shot while he focused on the door to find out what my colleague was talking about and I said, "All done." and put a band-aid on his arm.
He looked at me with such a confused expression on his face that I couldn't hold back a giggle.
"You gave me the shot! You really gave me the shot!" It dawned on him wincing as he touched his arm. "You're good, though. I didn't feel a thing!" he announced and smiled. 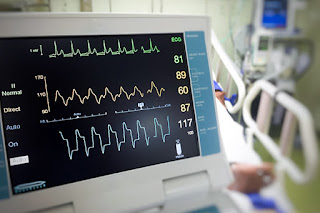 Picture credit
I was assessing an elderly man in the ER who was gasping for air and his nails turned to a bluish color. After I hooked him up to oxygen and the cardiac monitor and checked his vital signs, I typed up my findings on the portable computer while I monitored his oxygenation. His wife startled me when she yelled standing behind me, “He’s not an SOB, he’s a good man!”
Then I realized she was reading my notes and explained to her, “Ma’am, S.O.B. means shortness of breath.” 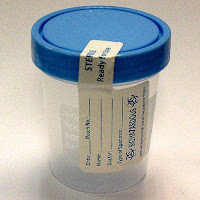 Picture credit
I was admitting a telemetry patient who had a urine analysis test ordered. I gave him the container with cleansing wipes and told him, “The bathroom is there, use this when you have to pee.”
I went back to see him about half an hour later. He handed me the empty, unopened container and said, “This is too small, I used the toilet.” 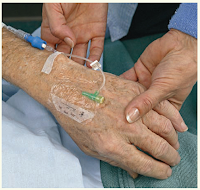 Picture credit
A large man in the ER screamed bloody murder after two nurses tried to insert an IV in his arm and failed. The guy threatened to call his lawyer and sue the hospital. He called the nurses incompetent fools, so, because I was the supervisor on that shift, they called me to deal with the angry man. I went into his room, introduced myself and told him, “Sir, I’m going to try to start your IV.”
He yelled, “I hope you know what you’re doing! This hospital is full of @#$%# idiots!”
I put my nurse face on and said in my soothing nurse voice to break his foul mood, “Don’t worry, Sir, I just watched a video on YouTube and learned how to start IVs.”
The surprised look on his face was priceless and I heard the nurses taking sharp breaths outside the door, ready for another angry eruption.
“Okay, you get one shot!” he replied somewhat calmer, but there was a calculating look on his face as if he was already counting the money he would get from a lawsuit. He watched me like a hawk and I saw his wife from the corner of my eye holding her phone and recording my every move.
After I started his IV and adjusted the IV fluid drip he said calmly, “You did alright.”
I left his room and one of the younger nurses gave me a fist bump and said, "I didn't believe it when they said you're a patient whisperer, but now I know." 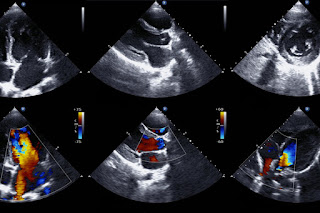 Picture credit
Nurses have medical problems too, so after experiencing some palpitation, I went to have an echo-cardiogram done. The technician prepared everything, hooked me up to the machine and started the test by sliding his “magic wand” over my chest. Being a nurse and being familiar what the heart and blood vessels are supposed to look like on the monitor, I kept a sharp eye on the monitor and told the technician, “Go back, I want to see the bicuspid valve again.”
He complied, but when I instructed him the third time as my cardiologist poked his head through the door, the technician begged the doctor, “Can you put her to sleep, please?”
The doc laughed and said, "She's a nurse, she can't help it."
I got the message and shut my mouth for the remainder of the test.

Like to read? Take a look at my books HERE

Erika M. Szabo​ makes us smile today with Nurses' Stories -- true stories of her experiences as a life-long nurse. #OurAuthorGang
+
6
7
6

#OurAuthorGang leader Erika M. Szabo​ shares tales from the nursing world -- true stories of her own experiences as a nurse. Stop by and enjoy a good laugh today!

LOL, those were great nurse stories Erika! I especially laughed at the YouTube story -- too funny and he even let you stick him! Wow, you ARE good!
+
1
2
1
·
Reply

Yes, that was quite a day :) He was the type of patient who wouldn't listen to reasoning or explanation and wouldn't calm down just keep working himself up into a frenzy. The only way to stop them is to shock them with something outrageous so their mind snaps out of the anger cycle. It also has to be something that makes them quickly think it over like "She must be joking. She look old enough to be a nurse for decades, so she must have started thousands of IVs." Once the mind takes a turn from frenzy to shock and thinking, it's a piece of cake from then on.

Swing by our blog today. It's sure to get you laughing #OurAuthorGang
+
2
3
2
·
Reply

You made me smile, Erika. Between this blog and your Life in the ER blog you have the makings of an excellent non-fiction boo. You have stories to tell. Plenty of them. Write the book!
+
3
4
3

Joe Bonadonna
5 months ago
+
1
2
1
+Erika M Szabo -- yes, I'm sure you do. Nurses, like policemen, always have great stories to tell, stories that run the gamut from the silly to the tragic.

Great stories, Erika, you must have the patience of a saint to deal with what you have to deal with each day at work.
+
3
4
3
·
Reply

Erika M Szabo
5 months ago
+
2
3
2
Nah, I just look at sick people from a different angle. I understand that they're scared, uncertain of what will happen to them and everyone copes with that vulnerability feeling differently. Some last out in anger, others cry looking for sympathy or try to minimize their condition. The first step is to recognize the patient's coping methods and approach them accordingly.

Today, Erika M. Szabo​ shares some of the funny moments that come with the highs and lows of nursing. #OurAuthorGang
+
3
4
3
·
Reply

Erika...how funny! I'm sure you have many other instances, too. Nurses are angels, and from me to you, thank you for your dedication to your profession and your care for each patient.
+
2
3
2
·
Reply

Erika M Szabo
5 months ago
+
1
2
1
Thank you Grace! It is a demanding profession but I wouldn't change a minute of the past 30 years since I got my license and have been working as a nurse.

These are some hilarious accounts, Erika. You know, this would make a great book! God bless nurses! You all put u- with some pretty crazy patients. I think men are probably the worst of all.
+
4
5
4
·
Reply

Erika M Szabo
5 months ago
+
2
3
2
Reply
Yes, I can honestly say that I've seen it all the past 30 some years :) Surprisingly, men are not worse than women when they're sick or in the hospital. Men more like silent sufferers because most were raised to show bravery and don't cry or complain. At home, it's a different story because they're not afraid show their feelings and pain to their families. It takes more effort to make men talk about their symptoms than women. Women are more talkative and open when it comes to medical problems and symptoms.

Lorraine Carey
5 months ago
+
2
3
2
+Erika M Szabo I can see that. I do know my husband is the worst patient. I had a nurse tell me one time he acted like twelve-year old. He fights tooth and nail. I think nurses are a special breed.