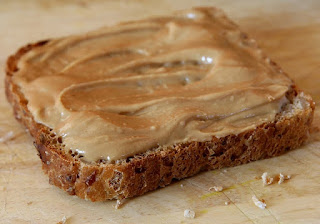 This is a short story about something that happened when I was young. I am sharing it here because for some reason it will not get out of my head.

First, a little background. I attended a Catholic grade school in a small town. We took our lunch to school as there was no cafeteria there. I was young back when milkmen still delivered, and parents could pay to have milk available for lunch. Since there were 6 of us, we were not among those students. However, if a student who did receive milk missed school, their drink was given out to one of us who did not have any. Obviously, I learned to eat without the benefit of a beverage to wash it down.

Two more things before the story. We had bed times. These times were based solely on our age. At the time of this story, I was about 10 and my bedtime was 8:30. This meant I missed the end of lots of TV programs. The final piece of background is my parents both worked nights, my dad left at about 10PM.

THE PEANUT BUTTER LESSON
It was a Wednesday night and my favorite show was on TV. Unfortunately, it lasted until 9 and I had to be in bed at 8:30. Just once, I would like to see the end of the show!

Cheryl and Rae were arguing over who was going to make dad's lunch. Neither wanted to do it and their voices were escalating. I walked into the kitchen and they both turned. It was as if a light lit up as the same idea crossed both of their minds.

"Cindy," they both said, "how would you like to stay up until 9 tonight?"

What could I say? "Of course!!!" Then I remembered who I was talking too and immediately asked, "What must I do?"

Cheryl replied, "just make dad's lunch. It is only 2 peanut butter sandwiches and a thermos of coffee. We'll do the coffee."

Well, I proceeded to make two PERFECT Peanut Butter sandwiches. My mouth was watering just from looking at them. I carefully wrapped them and placed them tenderly in dad's lunch box. Glancing wistfully back at the box, I went to the living room to watch my program in full.
The next morning I awoke to awful banging. My dad was home and he seemed to be ticked, Suddenly, my name was bellowed by him. I came running downstairs.

"Did you make my lunch sandwiches yesterday?" he asked.

Unsure why he was asking, I answered "yes".

"Sit down right there," he said as he pointed to my place at the table. Then he opened his lunch box and sat one of the PERFECT peanut butter sandwiches before me. "I want you to sit there and don't move until that sandwich is gone!"

I was confused, I mean, here he is giving me a treat when I thought he was mad. But, never one to look a gift horse in the mouth, I proceeded to enjoy the lovely sandwich. I glanced in the lunch box as I picked up the last half. I noticed that there was at least half of the other sandwich still in there. Hmm, I wondered. If I finish this, will he let me have that piece too?

As I finished the last bite, he came back into the dining room. "Well, do you have something to ask me?" he said.

I glanced at him then at the lunch box. I said, "I peeked in your box and saw the other sandwich, can I have it too?"

Oh my! I have never seen a face change so many ways so fast! When he found his voice, he asked, "Aren't you wanting a drink?" That is when I realized, my father did NOT EAT his lunch. Perhaps, my being told to eat it was NOT a treat but a punishment.

It turned out the lesson I was supposed to learn was there is such a thing as too much peanut butter on a sandwich. The lesson my father learned was this is not true for a child who loves peanut butter!