Book in the Spotlight #OurAuthorGang

Book in the Spotlight  #OurAuthorGang

Waters of Darkness
by
David C. Smith and Joe Bonadonna 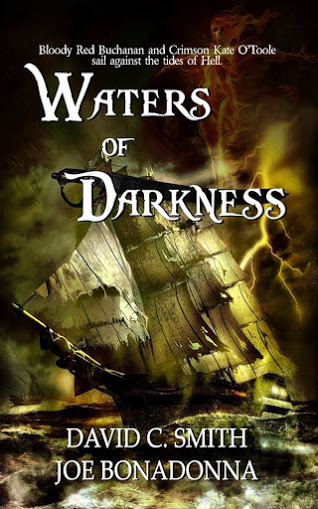 “One of the better New Pulp titles is, interestingly, a novel whose authors represent both the mid-Twentieth-Century and the New-Millennial pulp eras. This novel, Waters of Darkness, is collaboration between David C. Smith, one of the best authors to emerge during the 1970s pulp-paperback explosion, and Joe Bonadonna, one of the best writers to emerge in the New Pulp era. Waters of Darkness proceeds smartly . . . and as the horror grows ever grimmer and more triumphant the plot takes several surprising twists and turns. But even their final, unexpected journey through a remote jungle of South Africa may not save the few surviving pirates . . .  If you’re looking for superior swashbuckling pirate adventure in the mode of Captain Blood, Black Terence Vulmea, and Queen of the Black Coast, you’ll find Smith and Bonadonna’s Waters of Darkness to be just the red meat and heady rum you’re craving.”  — Cynthia Ward, Amazing Stories Magazine.

The main character is Angus “Bloody Red” Buchanan, a pirate of the West Indies who sails east across the Atlantic, to the Indian Ocean and the island of Madagascar, in search of new plunder and loot. With him on his Spanish galleon, the Raven, is his first mate and closest friend, Mose Cooper, an educated runaway slave from the American colony of Louisiana. Sailing alongside them aboard her own ship, the Witch of the Indies, is Buchanan’s partner and the love of his life, Katherine O’Toole, also known as Crimson Kate.
During their voyage they encounter the Servants of Dagon on the Isle of Shadow, an ancient ship of zombie sailors, do battle with French, Dutch and Arab corsairs, and tangle with a 1000 year-old Persian sorcerer who serves the aforementioned Philistine god of the sea. Man-eating phantoms, a beautiful demoness, assorted devils, dinosaurs, and creatures from the bowels of Hell will all threaten Buchanan, Kate and Cooper before their tale is done and told. There’s plenty of action, romance, betrayal, humor, drama and tragedy on this venture. There’s plenty of sword play, sorcery and battles at sea as Buchanan and company wade hip-deep in blood and brine towards a final confrontation with the Undying Wizard.

This is high seas adventure in the tradition of Rafael Sabatini. This is an Errol Flynn pirate movie crossed with Robert E. Howard, with a little H.P. Lovecraft, and Conan Doyle’s The Lost World to spice up the rum. All you need is a Wolfgang Korngold film score. So climb aboard as Bloody Red Buchanan, Big Mose Cooper, and Crimson Kate set sail upon Waters of Darkness, an old-fashioned pirate fantasy of swords, sorcery, and the supernatural.

Waters of Darkness is published by Damnation Books/Caliburn Press, and is available worldwide in paperback, Kindle and Nook editions
Amazon: http://www.amazon.com/dp/1615729127

You can read Cynthia Ward’s review in its entirety at Amazing Stories, online: http://amazingstoriesmag.com/2013/06/if-youre-fond-of-sea-fights-and-demon-lairs-a-review-of-waters-of-darkness-by-david-c-smith-and-joe-bonadonna/