Welcome, Teri! So glad you could join us today! 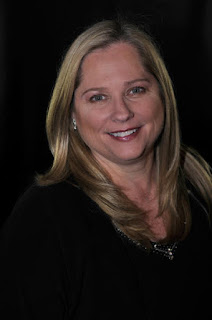 Teri Riggs was destined to be a writer.  As a small girl, she didn't read bedtime stories, she made up her own. Who needed LITTLE RED RIDING HOOD or THE THREE LITTLE PIGS when there were so many great tales bouncing around in her head?

When she grew up and became a mother to three little girls, she continued the tradition of making up bedtime stories.  On the occasions she chose to tell conventional fairy tales, Teri usually gave them a bit of tweaking here and there or added a new ending. Her girls loved it.

After her daughters had the nerve to actually grow up and leave home, Teri discovered she had a passion for writing and jumpted right in. It came as no surprise she chose to write romantic suspense and happily-ever-after's since that's the genres she loves to read.

Teri lives in Marietta, Georgia with her husband, one daughter, and new puppy, Winnie.

She still frequently tells herself stories as she falls asleep. The only difference now is she wakes up the next morning and turns her bedtime stories into books.

Teri loves hearing from her readers and may be reached: Lindsey James has just graduated from grad school and is ready to begin her life. A stalker has other plans for her. She swears off men and runs to Heaven’s Beach to hide, the place she feels safe and loved. The place her stalker knows nothing about—or so she thought.

Zack Simmons has promised Lindsey and her friends that he would keep her safe while she is living and working in Heaven’s Beach. Immediately Zack finds himself drawn to her, but after a recent and disastrous breakup with an ex-girlfriend, he plans to pursue the bachelor life.

Zack soon learns that keeping things professional in order to protect Lindsey isn’t quite as easy as he thought. Lindsey finds giving up on men to be a much bigger challenge when it comes to Heaven’s Beach’s sexy sheriff.
at April 08, 2018 No comments: