In my last post I talked about how Arthurian Legend began with the story of Merlin. Today, I wanted to look at an Arthurian location that I am sure you have heard of...

“And did those feet in ancient time
Walk upon England's mountains green?”

There is something about Glastonbury (the fabled Isle of Avalon), she gets under your skin and stays there. I have heard many accounts of people coming from all over the world to climb the Tor, or to walk around the romantic ruin that is Glastonbury Abbey. This draw to Glastonbury isn't a new thing, though. People have been doing it for thousands of years. The reason? Well, there are many. But for today's post, I want to look at some specific Arthurian reasons as to why Glastonbury was a place of pilgrimage in the past.

Joseph of Arimathea and Glastonbury.

“Now there was a man named Joseph, a member of the Council, a good and upright man, who had not consented to their decision and action. He came from the Judean town of Arimathea, and he himself was waiting for the kingdom of God. Going to Pilate, he asked for Jesus’ body. Then he took it down, wrapped it in linen cloth and placed it in a tomb cut in the rock, one in which no one had yet been laid. It was Preparation Day, and the Sabbath was about to begin.  The women who had come with Jesus from Galilee followed Joseph and saw the tomb and how his body was laid in it. Then they went home and prepared spices and perfumes. But they rested on the Sabbath in obedience to the commandment.”
Luke 23:50-53

Joseph of Arimathea's story can be found in all four gospels of the Bible.  But that is not the only place we can find him. You can also find him in Glastonbury, England!

Joseph of Arimathea — A British Story?

According to the Glastonbury — I am going to call it Legend — Joseph was a wealthy merchant who travelled to Cornwall to purchase tin. On one of these trips to Britain, Jesus came with him — hence Blake's famous opening line in Jerusalem.

In c1340 John of Glastonbury - a Benedictine monk and chronicler - assembled The History of Glastonbury Abbey. Just to put this time in context we are in the reign of Edward III — the Abbey has a few years yet before Henry VIII Reformation and Dissolution of the Monasteries (1536-1541).
Now Glastonbury, at the time was a place of pilgrimage. Not only did people come to the Abbey because of their interest in Joseph of Arimathea, but they also came because of the Arthurian connection.

Joseph of Arimathea and King Arthur

John stated that when Joseph came to Britain, he brought with him two vessels. One of these vessels contained the blood of Jesus and the other his sweat. John also claimed that Arthur was descended from Joseph and he had the pedigree to prove it!

There was no reason to doubt John’s words. Years later, after the Dissolution of Glastonbury Abbey, Elizabeth I, told the Roman Catholic Bishops that the Church of England pre-dated the Roman Church in England because of Joseph's missionary work.

Over time, the version of events changed. Instead of two vessels, Joseph brought one, and this vessel became known as The Holy Grail. It is said that when Joseph visited Glastonbury, he hid the Grail in a well  — which is why the water has a reddish hue to it. You can visit that well today, and if you ever find yourself in Glastonbury, I recommend that you do, The Chalice Gardens are beautiful to relax in on a summers day. 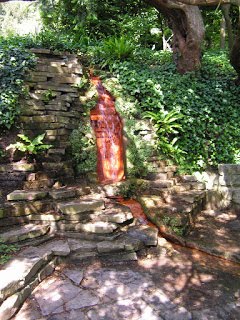