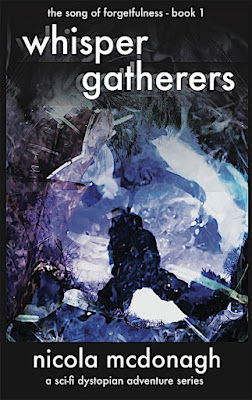 “If you like action, and science fiction then you’ll appreciate one of the first books EVER that gives you high powered adrenalin with chilling revelations of utter suspense!”

The future is a dangerous place. Rising oceans and disease have wiped out most animal and human life. Those who are left are scattered, scared and hungry.

Now, starving Renegades are gathering, ready to storm the last haven in NotSoGreatBritAlbion. Whispers of a saviour have brought them to the perimeter fences. They want Adara Catcher of Birds.

17-year-old orphan, Adara, isn’t like the other girlygigs in Cityplace. She has six fingers on each hand and a power she is forbidden to use. When her brother, Deogol, is lured away from his home by a dark stranger, Agros send in troops to lay waste to the capital. Adara must choose between saving her brother or joining her Santy Breanna to defend the once peaceful metropolis from a vicious and deadly force.

“The dystopian world is fully imagined and a treat for any fantasy reader seeking proper escapism. The characters are lovely, with a gutsy heroine to get behind, but for me what really stands out is the dialogue and language, which sets this series apart. Think 'Lord of the Flies' meets the wild children in 'Beyond Thunderdome' and you're somewhere close. It's fascinating to come across the phrases and words that are disjointed from our own yet not entirely different; chinese whispers from our language passed on through the years and slowly changing as they are passed from ear to ear.

The story is fast paced and hits the ground running from the moment the sinister Praisebees enter the fray, and the tempo doesn't let up. A pleasure to read, I look forward to more in this series and from this visionary author.”

I became aware of a rumbling sound, not unlike thunder. I turned to Santy Breanna and saw her tear off down the central aisle towards the main door. Greatgrangran folded her arms and let her head drop onto her chest. I strained my neck to see what was going on.
“Our time is nigh. Prepare to meet your maker. Make peace with the BabyCheesus and repent your slovenly ways!”
Huffin’ hell, Praisebees.
Santy Breanna was pushed backwards by two burly guards as a whole load of Christfans burst into the building. They wore long flowing tunics tied loosely around the waist by some raggedy rope. They flipped-flopped their way towards the stage with scanty sandals that exposed chipped and mucky toenails. They showed their teeth. I’d never seen such dirty dental prongs before. All were tarnished brown, with stuff that looked like flesh, stuck between them. Some gouged out the sinuous bits with their jagged fingernails and popped the remnant into their mouths to be swallowed with relish. So, not just Praisebees then? Were these fanatics Carnies too? I shuddered.
A loud gasp and a general putting of hands over mouths ensued when the bedraggled worshippers walked past. Santy attempted to force her way through the Praisebee guards, but they were huge and stood in front of her like the trunks of trees.
The sheriff and Headteach, who were still on the stage, huddled together and looked around for some kind of security backup. Sheriff Fychan, a small thin male without much hair, yanked out a comdevice and screamed down it for assistance. He threw the thing onto the floor when all it did was make a buzzing noise. He peeled the Headteach’s arms from around his waist. Stepping forward, he said, “Stop right where you are. Advance no further. I said, stop!”
But the Praisebees did not. They tramped faster chanting, “Cheesus is life. Cheesus is good. Believe in him and live forever.”
A catchy little ditty to be sure, but it fell upon deaf ears. All in Cityplace believed in the OneGreatProvider that centuries ago saved the few remaining bigwigs from famine and disease. He built our now great home where we live, safe and sound. Except that today, we were not. The leader of the group walked up the steps and onto the stage. Sheriff Fychan held up his hands in front of his chest to warn the tall slim male, to advance no further. The ‘dult smacked his mitts away. He turned to the quaking crowd.
“Calm yourselves. Do not be so a-feared. We come in peace. We come because of rumours.”
Nad.
“Word has filtered through to our nomadic ears that the dead and lost ones have risen.”
Double nad.
“That these troubled spirits have come to warn us of things to come. Things most wretched and horrible. We must listen to them. Mend our ways. If not, then all upon this land-starved planet will perish once and for all. If that is so, then a saviour must rise to save folk. That hagio, or saint, will free us from despair and deprivation. That saviour is here.”
Triple nad.