Love in the Afterlife
Posted by Joe Bonadonna 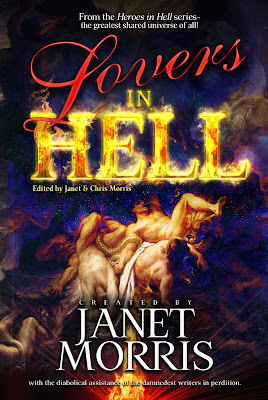 In Lovers in Hell, Erra the Babylonian God of Mayhem and Pestilence, and his Seven Sibitti warriors continue punishing the innocent and guilty alike. And Satan continues with his scheme to destroy all hope as the Damned face the finality of Obliteration as people disappear and what they know, and what they knew, goes with them. Since love fosters hope, this volume is about lost loves, lost hope, lost opportunity, and the plight of those whose lovers have been Obliterated or want Obliteration. Some damned souls hope to avoid the purge by fleeing to the nether Hells, where Judges reside who might save them. Others, wracked by fear of loss, go into hiding.

The plagues are evolving, the floods have left a new coastline to explore, and many displaced souls wander about, lost, confused and frightened. Lovers may have been separated in the disasters or shunted to parts of Hell where they know no one, and lovers may have been torn apart by plagues or purges or human error. Oblivion is transitory, but Obliteration is forever: Obliteration erases not only who you are but who you ever were.  Obliteration is meant to show those Above (ie: Heaven) that Satan is on the case, making hell more hellish.

But as someone once sang, only fools fall in love, and hell is filled with fools. Our damned lovers include: Christopher Marlowe and Will Shakespeare, Napoleon and Wellington, Orpheus and Eurydice, Hatshepsut and Senenmut, Abelard and Heloise, Helen and Penelope, Saint Teresa and Satan’s Reaper, Madge Kendall and the Elephant Man, and many more . . . all of whom pay a hellish price for indulging their affections.

Shakespeare said “To be wise and love exceeds man’s might,” and in Lovers in Hell, the Damned exceed all bounds as they search for their true loves, punish the perfidious, and avoid getting caught up in Satan’s snares. In ten stories of misery and madness, hell’s most loveless seek to slake the thirst that can never be quenched, and find true love amid the lies of ages. This edition features stories by Janet Morris and Christopher Morris, Nancy Asire, Joe Bonadonna, S.E. Lindberg, Michael E. Dellert, Michael H. Hanson, A.L. Butcher, and Andrew P. Weston.

Lovers in Hell, Volume 22 in the Heroes in Hell Saga, is published by Perseid Press. Book design: Christopher Morris. Cover artwork and design: Roy Mauritsen. Cover painting: The Fall of the Rebel Angels by Charles Le Brun (1619 - 1690.) Lovers in Hell is available in PRINT and KINDLE editions.

Lovers in Hell -- Joe Bonadonna​ shares the latest addition of this amazing series on #OurAuthorGang. Stop by and check out his post!
+
1
2
1
·
Reply

This is a very excellent volume in a fantastic series and I am proud to play a major role in this "Bangsian Fantasy" that is set in Hell with famous and infamous people all throughout history, as well as characters from myth, legend and folklore, as well as fictional characters pre-1900. I'm also extremely proud of my Gothic/horror romance, "Withering Blights," possibly one of the best stories I've written to date. I'm already working on a story for next year's volume, which will be titled Mystics in Hell. Thank you!
+
3
4
3
·
Reply

Today's Book in the Spotlight on #OurAuthorGang, is Lovers in Hell, the latest volume in the popular and long-established series, The Heroes in Hell Saga. Check it out. It's a great volume! Thank you!
+
2
3
2
·
Reply

Joe Bonadonna
2 months ago
+
1
2
1
Thanks, Chris. The series has been around since 1986, then came to "an end" around 1990 or so after about 13 volumes. It was resurrected in 2011 by Perseid Press and I believe this is volume 20 in what I call The Eternal Infernal Saga.

Today in the spotlight, Joe Bonadonna​ introduces us to Lovers in Hell. #OurAuthorGang
+
2
3
2
·
Reply