A Small Gang of Authors: Baba Yaga Folk Lore Part 1: Rebecca Tran Rtranbooks.net Recently I wrote a novelette based loosely on the folklore surrounding Baba Yaga. When I started the projec... A little mythology with Rebecca Tran.
at June 14, 2018 No comments:

Recently I wrote a novelette based loosely on the folklore surrounding Baba Yaga. When I started the project I was surprised by the number of people who never heard of her before. I have run across her several times in books and tv shows. I think I asked ten people if they knew who she was and only one said yes. In this series I thought I would share with you some of the folk lore surrounding this interesting character over the next three to four posts.

Baba Yaga is traditionally found in Russian and Slavic folk lore. There is debate over the meaning of Baba's name. Depending on the country of origin Baba can mean anything from old woman, to hag. Most believe it refers to the latter. The meaning of Yaga however, seems to elude most scholars. In some slavic languages it translate to witch, in others horror and my personal favorite is fury in Polish.

Sometimes Baba Yaga is one woman and sometimes a trio of them. Whether one woman or three she is always pictured as an old crone. Her body is deformed, with boney knees,piercing cold eyes, and
iron teeth.

Baba Yaga is known to fly around in a large Mortar using the pestle as both club and rudder. Her home stands on chicken legs and moves at Baba's request.  The fence around her yard is made of bones just in case the chicken legs weren't intimidating enough.

In case you haven't guessed by now Baba Yaga is a powerful witch. She is as inclined to help as she is to harm. Most of her stories revolve around themes of having a pure heart, integrity, and politeness. Depending on the qualities the other characters display arre Baba may help or harm you. If you make her mad enough so say she may even eat you.


Baba Yaga is the primary antagonist in the fantasy novel Enchantment by Orson Scott Card, appears in the short story "Joseph & Koza" by Nobel Prize-winning writer Isaac Bashevis Singer, and is regularly featured in stories in Jack and Jill, a popular children's magazine.

My novelette Magic Always Has a Price features Baba Yaga in an unexpected way. 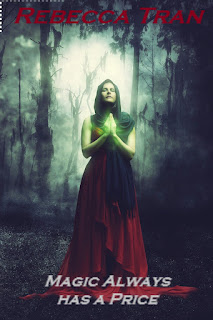 Magic Always Has a Price
Excerpt:

One night in the middle of the summer after a long day at the hospital I fell into a fitful sleep. I was in the woods near dusk. A fog rolled in. I heard hoofbeats. This time I wasn’t scared. I understood. It was the red horseman. Late afternoon is when he held the most power. He was patrolling the woods keeping it safe. What was he guarding against though? What was the threat? I walked down the path until I found the fence made of bones. They were old bleached white by the sun. Most were animal bones: wolves, bears, dogs, house cats, mountain cats, but there were human bones too.

The wind shifted, and it was suddenly very cold. I looked up to see the door to the log cabin open. Spider webs hung across the door. No one lived there. I looked closer at everything around me. The windows were dirty and full of spider webs. The fence itself was in disrepair. The horseman rode up behind me, and I felt his emotions. He was sad. The horseman wasn’t patrolling. He was searching for the owner of the cabin.

Then I heard the ravens. It started with a single call, then two then three. I looked up, and there was a whole flock of them in the trees above me. I turned and ran down the path. I had to get away. I didn’t want to know whose death they brought. Running blindly through the woods I tripped on something hard and solid. I thought it was a rock at first but it was too smooth, and there was a hollow on the underside that caught my foot. I used a quick spell to unearth enough of it to see what it was. A huge mortar lay on its side half buried in the dirt.


Only one witch ever used a mortar like that and had three horsemen. Why? Why was she plaguing my dreams? I heard a cackle in the distance. I moved to get up, but tree roots grabbed my arms and legs. The laugh grew closer. “No, no, no” I was panicked now.

If you like myths and folk lore check out Erika Szabo's series on Folklore and Myths Parts 1, 2, & 3

Great post an excerpt Rebecca! I heard of Baba Yaga, a scary witch, from Polish neighbor, when I was a kid. She caught us snacking on raspberries in her garden and told us that if we steal one more fruit from her garden, Baba Yaga will take us to the forest and turn us into rats. That was enough to scare us not to climb her fence ever again. I'm looking forward to reading your series and learn the folklore about my childhood's scary witch :)
+
3
4
3
·
Reply

Thanks Erika. I really couldn’t believe how many people never heard of her. I mentioned her name and it was like I had three heads. I’ll get more in depth next time.

You know me. I have a knack for finding the unusual. Glad you enjoyed it Mary Anne.

THanks Gang for all your kind words and support.

Rebecca Tran​ shares the folklore of Baba Yaga, plus an intriguing excerpt of her own Baba Yaga story!

Baba Yaga is so interesting!! And your snippet, oh my gosh, that is GREAT!

Thanks Ruth I’m usually a happy person so going dark and creepy is hard for me. I really had to channel dark vibes there.

Love the legend of Baba Yaga! You will too. Take a look. #folktales #urbanlegends #blog #BabaYaga #OurAuthorGang
+
3
4
3
·
Reply

My novelette definitely has a surprise. Hope you enjoy it.

+Rebecca Tran I'm going to order it. Thank you!

I'm so stranger to Baba Yaga being my granny was Slovenian. I love the tales and so glad you have brought her to light as many do not know who she is. I'm going to have to read your novel now that I know you feature this lovely Crone. Great post.
+
1
2
1
·
Reply

Great info on Baba Yaga. I had heard the name but never knew the story. Thanks for sharing.
+
1
2
1
·
Reply

I’m a panster and tend to write whatever strikes my fancy at the moment. It’s great because I get to learn exciting new things. It’s alao frustrating because everything I try to start a new book there is a ton of research to do. I might as well share what I learn.

An interesting and informative post by Author Rebecca Tran about the Baba Yaga. I clicked the link, thank you for the free book!
+
1
2
1
·
Reply

Baba Yaga is one of those flexible characters that I wish more people would incorporate into their writing, whether it was literally or in some loose interpretation. For all intents and purposes she’s the slovic version of a boogie man. What a fun idea to miss out on.

I love reading about witches and folklore. This is a great post about Baba Yaga and what she represents, Rebecca. More power to witches is what I say!
+
1
2
1
·
Reply

Rebecca Tran
7 months ago
+
1
2
1
Nikki I’m sure your really going to enjoy one of the later posts in this series pertaining to a goddess of witches.

I'd never heard of Baba Yaga until her name popped up on a paranormal TV show. I've seen and heard lots more of her since. Cool post. Can't wait to learn more.
+
3
4
3
·
Reply

Today, Rebecca Tran, gives a bit of history of the Baba Yaga myth and introduces us to her related story, Magic Always Has a Price. #OurAuthorGang.
+
2
3
2
·
Reply

Today on #OurAuthorGang, Rebecca Tran​ talks about the myth of Baba Yaga, and treats us to an excerpt of her novelette, "Magic Always Has A Price."
+
3
4
3
·
Reply