A Small Gang of Authors: "Bloody. Brutal. Bannockburn." #History #Scotland...: Scotland by Mary Anne Yarde Even if it is just my fanciful imagination, I like to think that Scotlan...
at February 22, 2018 No comments: 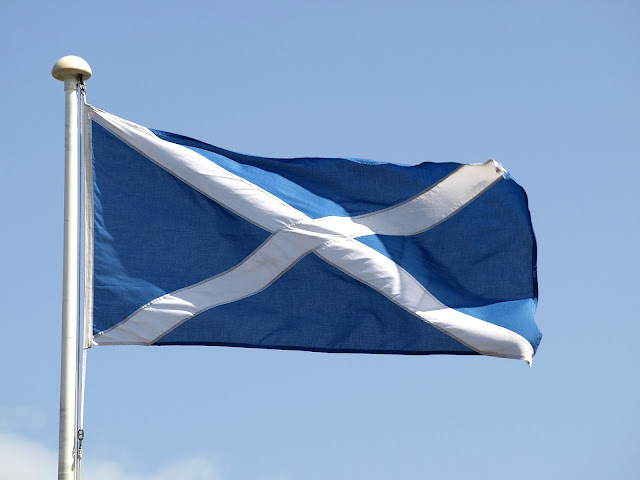 Even if it is just my fanciful imagination, I like to think that Scotland is, shall we say, in the blood. My ancestors certainly came from there. They were an integral part of Scottish History, just as my ancestors were to English History. But as I stood at the monument at Bannockburn, I felt an almost overwhelming sense of the past got through me. Voices, shadows, hopes, fears, kind eyes, cruel ones, exhaustion and relief - no joy, just relief that it was over. A writer's paradise if you like. I can close my eyes and hear the music, and I am not the only one. The past is alive, if only you will take the time to listen, Scotland will tell you her story.


Today, our obsession with Scotland can be blamed on films like Braveheart or the majestic story telling of Diana Gabaldon, Outlander series. Scotland is in vogue, so to speak. And although the Scots call Braveheart "that comedy," it has romanticised their country for them. Everyone knows who William Wallace is - thanks to Braveheart.

I have been to Scotland several times, but I just can't seem to get enough. Today, I wanted to share an experience I had back in 2016...

"O Flower of Scotland,
When will we see
Your like again,
That fought and died for,
Your wee bit Hill and Glen..."

There is one word that sums up The Scottish War Of Independence
and that word is ... 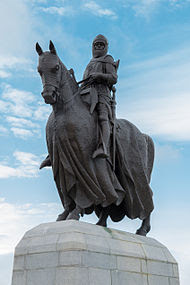 It has been over 16 years since I last visited Bannockburn and I was looking forward to showing my children the statue of Robert The Bruce on his horse, but as we pulled up in the car park, I realised that 16 years was a long time. They had built a new visitor center and I couldn't wait to get inside!

When we bought our tickets, we were asked if we would like to go on the museum tour and of course, we said yes. She then produced some 3D glasses. "You'll need these." Interesting, I thought.

It was twenty minutes until the next tour, so we decided to head outside and go and see that famous monument. 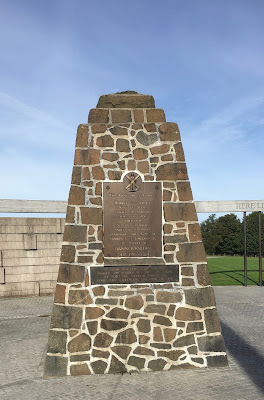 The Battle of Bannockburn Visitor Centre isn't quite on the battlefield, but is built in what was the Scottish Camp. There really isn't a better place for a monument for those Scottish hero's who fell. Bannockburn was the ultimate Scottish victory against King Edward II. They did, after all stand…


"...against him,
Proud Edward's Army,
And sent him homeward,
Tae think again."

The monument was beautiful and peaceful ~ peaceful, yes, I think that is the word I am looking for. It was a place to reflect and to remember all those who died that day. 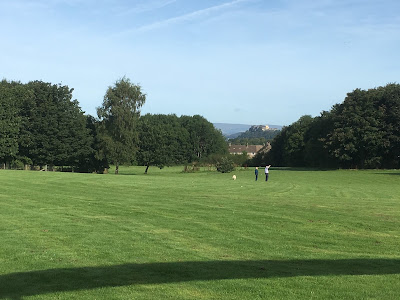 We wondered back inside in time for the tour.

When I woke up in the morning, I wasn't expecting to find myself in the middle of The Battle of Bannockburn, with arrows whizzing over my head, horses charging right at me and people dying to my left and my right. I mean nobody expects that? Right? But this is what you get at Bannockburn. Bannockburn has invested in state of the art, 3D technology so you experience, safely, what the battle was like. Wow! It was amazing. A little gruesome, but not so scary that it is unsuitable for children. It was truly incredible. I have been to some of the best visitor centers in Britain, but this one...this is something else. Oh, my days! It was ~ I'm sorry, I am running out of adjectives to describe it! And that wasn't all....

The tour continued...we got to - in their own words

"Walk the battleground, guide your own army of medieval soldiers through the 3D simulation and visit the all important Bannockburn; a stretch of water that proved the turning point in the battle."

If you have ever played Rome Total War, it was the same principle, but on a bigger scale. How awesome is that?

The wonderful guide split us into teams, and we stood around this huge map of the terrain while he showed us how the battle of Bannockburn played out and then it was our turn. We were going to make the decisions. We were going to fight. We were going to watch the battle unfold on the map in front of us. My youngest, who was 6 at the time, was crowned King Robert of Scotland, and it was a role he took very seriously, although he seemed to be slightly more concerned with killing his brother who was an English knight than victory over the English army - talk about family loyalty! It went out the window.

There were a lot of nervous faces when the guide asked for instructions.

"Where do you want your knights? Speak up, I can't hear you."

"You want to put them against the schiltron? Did you wake up suicidal?"
and so it went on!

It wasn't the most predictable of battles, but it was certainly entertaining. The Black Douglas turned tail and ran back to Stirling ~ I'm not sure what he would have made of that if he were still alive! But King Robert - my son - was much more decisive and he led his troops to victory over the English Queen ~ yes I did say Queen ~ it is pretend ~ Robert the Bruce wasn't really 6 when he fought the English at Bannockburn! The Scots were victorious although victory wasn’t actually decided at Bannockburn but Stirling. History was rewritten! The result was the same, and that is the main thing! I think… 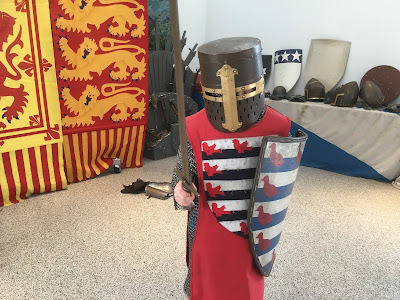 My youngest, ready for battle ~ although he couldn't see where he was going!!

Talk about bringing history to life.  You couldn't get any better than this.

The Du Lac Devil
(Book 2 of The Du Lac Chronicles) 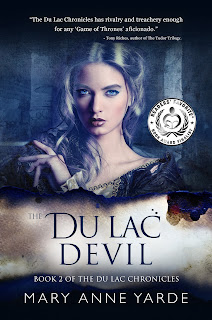 War is coming to Saxon Briton.

As one kingdom after another falls to the savage might of the High King, Cerdic of Wessex, only one family dares to stand up to him — The Du Lacs.

Budic and Alden Du Lac are barely speaking to each other, and Merton is a mercenary, fighting for the highest bidder. If Wessex hears of the brothers’ discord, then all is lost.

Fate brings Merton du Lac back to the ancestral lands of his forefathers, and he finds his country on the brink of civil war. But there is worse to come, for his father’s old enemy has infiltrated the court of Benwick. Now, more than ever, the Du Lac must come together to save the kingdom and themselves.

Can old rivalries and resentments be overcome in time to stop a war?