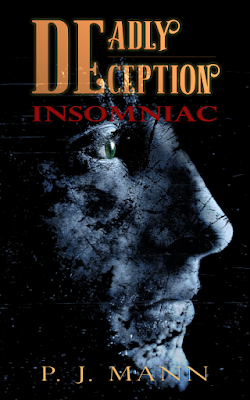 This is the second book of the trilogy Deadly Deception. As we say bye-bye to Ethan Jackson who was the main character of the first book of the trilogy, we are going to meet new friends, which will entertain us with their personal vicissitudes.

Here is the blurb:
Something keeps Laura Jefferson up at night. Maybe it’s the Boston traffic, maybe the sounds of the city outside her apartment window, maybe the stresses of day to day life. Whatever it is, when she’s offered a radical treatment at a secluded hotel, she doesn’t even hesitate.

But while the hotel is perfect, the grounds idyllic, and Dr. Wright and his staff friendly and eager to help, it isn’t long before Laura’s fellow patients begin acting strangely, some even dropping out of the program altogether, disappearing into the night. As Laura loses chunks of time, a detective arrives, and the questions at the heart of the hotel begin to unravel.
Continuing the trilogy, Deadly Deception -Insomniac- draws closer to the mystery of Dr. Wright’s research, and the lies behind Laura’s perfect night of sleep. 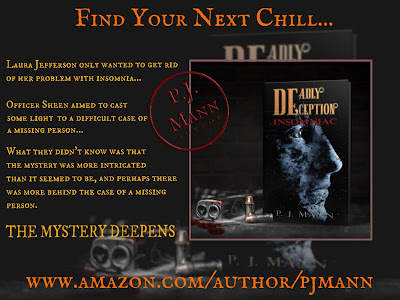 Excerpt:
He took out his notebook and started to write some notes about what his feelings were. That was a sort of self-psychoanalysis or a way to understand himself and to get a better grasp over the triggers that take over a serial killer.

Although with just one murder on his conscience, he could not consider himself a serial killer, he knew from the very beginning that the need to step into murder was feasible.

“There are things that I still fail to understand about the feelings of being an assassin, of planning and eventually executing a murder. Something for sure is the powerful effect it has on the conscious.
Like a heavy curtain, it is able to obliterate any other feelings like compassion and empathy. When I think about the process, my brain gives priority to what gives me some sort of pleasure. It is like it’s trying to push aside the feelings like regret, fear, compassion, and empathy, emphasizing the pleasure I can get from the power of choosing the fate of another human being.
It feels like I am no longer a fellow human, but a sort of super being that has the power and right to decide who is going to live and who instead has to die.
This is a sort of trigger I might use with my patients, to help them in their fight against the murderer inside them…
Sometimes to cure a monster, you need to become a monster yourself.”

He shook his head and hoped that nasty story would have come soon to an end. “If I get out of this alive, I promise to leave the country and peacefully enjoy my life.”
He took a deep breath and switched off the lights hoping to find some rest.