Women in Science Fiction – The Duchess of Newcastle - Margaret Cavendish 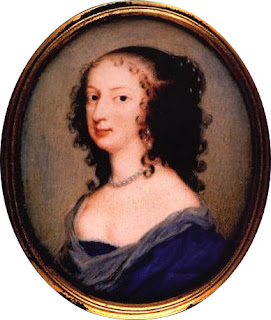 While science fiction evolved in the 1800s and early 1900s into its modern form, the pioneers of speculative fiction included the Duchess of Newcastle-upon-Tyne Margaret Lucas Cavendish (1623 – December 15, 1673).

The youngest of eight children, Cavendish received an education appropriate for young ladies of the era. She had tutors, though she indicated that she and her siblings didn't pay a lot of attention to the tutors' efforts toward teaching the children formality. They did learn the basics of reading and writing and the girls received instruction in needlework, singing, dancing and musical instruments. Despite the prevailing belief that women should not show their intelligence in public, Cavendish began writing at a young age.

Before Cavendish was born, her father, Sir Thomas Lucas, killed a man in a duel and was exiled. The family returned to England after King James issued a pardon in 1603. After her father's death, the family remained together, but in 1640 civil war broke out. The Lucas family, devout Royalists, fled to Oxford where King Charles I and his court were in exile. She convinced her mother to allow her to become a lady-in-waiting to Queen Henrietta Maria. The subsequent exile to France probably influenced her later work, The Blazing-World. It was the first time she'd been completely separated from her family.

It was during this exile that she met her future husband, William Cavendish, the Marquis of Newcastle. While a member of the Queen's court, she was quiet and bashful, which the Marquis (who later became a Duke) liked. They married in 1645. While in exile they were relatively poor. The Marquis and his brother, Sir Charles, taught her science and philosophy.

Cavendish published her first book Poems and Fancies in 1653, two years after she and her husband returned to England. It was a sensation – a woman publishing a book – and was both applauded for its originality and criticized for spelling, grammar and writing style. She went on to publish 22 works, including the precursor to modern science fiction, the utopian novel The Description of a New World, Called The Blazing-World, also known as The Blazing World. 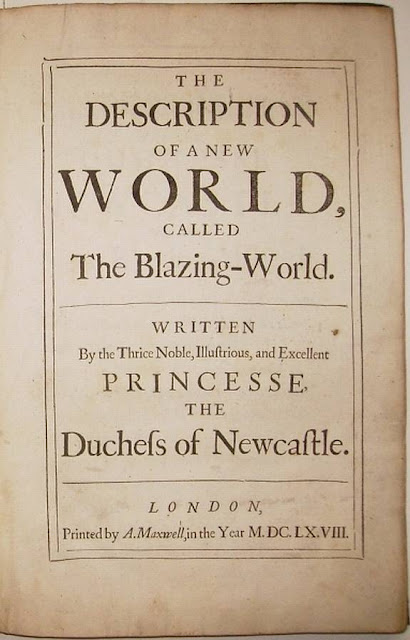 The story takes the reader from a ship driven by storms to the North Pole and thus transferred to another world. The only survivor of the disastrous voyage, a young lady (named Margaret Cavendish) is rescued by intelligent talking bears and becomes empress over the various species that inhabit her kingdom.

The Blazing World was published in 1666 conjunction with Observations upon Experimental Philosophy. Although seventeenth century women rarely wrote about natural philosophy, Cavendish published six books on the topic. She also wrote two volumes of plays, published in 1662 and 1668. She was the first woman invited to join the Royal Society, though many members disparaged her works, in part due to her sex as well as her eccentricity.

While Cavendish was not taken seriously by her contemporaries and literary historians, modern writers have rediscovered her works. Virginia Woolf said, "though her philosophies are futile, and her plays intolerable, and her verses mainly dull, the vast bulk of the Duchess is leavened by a vein of authentic fire. One cannot help following the lure of her erratic and lovable personality as it meanders and twinkles through page after page. There is something noble and Quixotic and high-spirited, as well as crack-brained and bird-witted, about her. Her simplicity is so open; her intelligence so active; her sympathy with fairies and animals so true and tender. She has the freakishness of an elf, the irresponsibility of some non-human creature, its heartlessness, and its charm."

With the resurgence of interest in Cavendish and her works, The Blazing World has played a part in Alan Moore's The League of Extraordinary Gentlemen graphic novels, China Miéville's Un Lun Dun and Siri Hustvedt's own novel, The Blazing World.

Mary Cavendish died suddenly in 1673, at only 50 years old. She never had children, so we're left only with her books and writings to showcase her visionary peeks at gender, feminism, travel between worlds and Utopian society.

Check out this phenomenal post about Margaret Cavendish on #OurAuthorGang

Wow Ruth you never cease to amaze me with all the great women authors you find. It almost makes me want to try my hand at another Sci-fi novel.
+
1
2
1
·
Reply

Women writing in the 1600s was unheard of but Sci-fi was impossible, wasn’t it? Ruth De Jauregui tells us the truth on #OurAuthorGang
+
1
2
1
·
Reply

Today on #OurAuthorGang, author Ruth de Jauregui​ continues her series on Women in Science Fiction, and this time out it's The Duchess of Newcastle: Margaret Cavendish.
+
2
3
2
·
Reply

Incredible article, Ruth! I have no idea where you're finding out about these women of early science fiction, but your research is well worth the effort. Bravo!
+
2
3
2
·
Reply

What a great achievement for a woman in the 1600 hundreds! Thank you for posting this series about women writers, I'm really enjoying it!
+
2
3
2
·
Reply

My contribution to our blog today. The Duchess of Newcastle wrote the precursor to the modern science fiction story. Stop by and find the link to read her whole story online. #OurAuthorGang
+
1
2
1
·
Reply

Did you know in the mid 1600's that The Duchess of Newcastle, Margaret Cavendish, was an author? Read more about her in today's blog post as Ruth de Jauregui continues her fascinating series...Women in Science Fiction #OurAuthorGang.
+
2
3
2
·
Reply

I'm loving this series, so informative. I'm happy to have learned of this author today. I'll definitely have to read her work.
+
3
4
3
·
Reply

Today, Ruth de Jauregui​ offers the life and writings of another author ahead of her times, Margaret Cavendish. #OurAuthorGang
+
3
4
3
·
Reply

I love reading about these brave women who risk ridicule in that time period to follow their passions. I've never heard of her until now. Thank you for bringing her story to light.
+
3
4
3
·
Reply

Great post about a pioneering female writer. She must have been a strong woman to have done what she did in a time when women had little hope of being taken seriously as an author.
+
3
4
3
·
Reply

Critics were really mean to her too. But she had her fans!!

I have not heard of Margaret Cavendish before. How terribly exciting it must have been for her to publish a book in that period.
at July 23, 2018 No comments: