Dragons are a common thread in many different countries' mythology. Each type of dragon is unique to the area where they originated. India, for instance, has serpentine dragons no arms or legs, and some have multiple heads.

While other dragons are much more familiar to most like a Wyvern. This dragon originates in Europe and dates back to the medieval period. It is serpent-like with two legs and wings. Wyvern or Wyvern type dragons can be found all over Europe. They were used as battle standards, on shields and coat of arms.

A common problem for many people at least here in the States is that people don’t realize that the Wyvern earned the title of European Dragon. It’s diversity and spread throughout the country far outpace its cousin the Welsh Dragon.

Most people think of the Welsh Dragon when they hear European Dragon. It's more reptilian with four legs and wings. I think for us Hollywood has defined this as a proper dragon.

Welsh Dragons have their own long, rich history though. Merlin told the Welsh King Vortigern that the red dragon defeating a white dragon in his dream represented the English defeating the Saxons. A red Welsh Dragon was also believed to grace King Arthur’s battle standard. King Henry VII even used a red dragon to support his royal coat of arms.  While Welsh Dragons aren’t European Dragons, they certainly are English dragons. 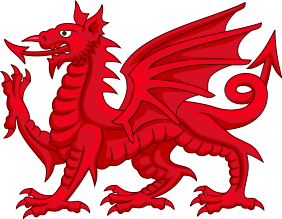 If you’ve read my other posts you know I like my writing as accurate as possible. However, when I wrote my dragon shifter series Dragons of the North, I used Welsh style dragons that admittedly moved from Europe ages ago. They even admit they were European dragons. It was written primarily for the American market, and I had to go with the flow. This was one of those times I had to sacrifice reality for art.

Enter a fantasy where devastatingly handsome men become dragons at will. Split into four territories, their power struggles put the women they love in danger. Its the last mistake their enemy will make. A dragon will always protect their mate. After all. when you fall in love with a myth you're guaranteed a fairytale ending.

With 4 novellas and 5 sexy dragons in this set there's plenty of action and steamy romance. All of the stories have adult themes and are intended for adults. Book 3 is an MFM ménage.
Available at most major retailers