Our Guest Today is Terri Bruce 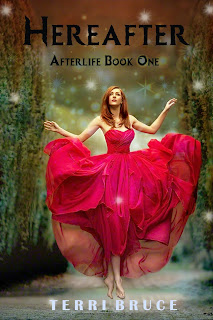 This book series features real afterlife beliefs and mythologies from every culture and religion, though it's not a religious book - I just like mythology :-) I wanted to write a book that took all the various stories and beliefs and combined them together into a seamless whole. I also wanted to write a love story that is not a romance - there are many kinds of love, and I think we tend to focus exclusively on romantic/sexual love. I wanted to surface some of other kinds of love, such as companionable love and romantic love that may not be sexual.

One thing readers of the series may notice is that every book starts with the main character opening her eyes. I did this on purpose because writers are told to never start a book that way, and being told not to do a thing just makes me want to do it all the more! :p (I'm contrary like that. I was also told by numerous agents that books can't feature one protagonist that is an adult and one that is a child because kids don't like to read about adults and vice versa. I thought that was extremely strange advice and am happy I ignored it. Jonah and Irene are great fun to write together and I can't image this story if they were both teens or both adults. They each are who they are, in part, due to their age/where they are in life and they relate to the other person, in part, because of the other person's age. Irene has a wealth of experience that Jonah admires and Jonah has an innocence and naivety that Irene admires/values).

Why let a little thing like dying get in the way of a good time?

Thirty-six-year-old Irene Dunphy didn't plan on dying any time soon, but that’s exactly what happens when she makes the mistake of getting behind the wheel after a night bar-hopping with friends. She finds herself stranded on Earth as a ghost, where the food has no taste, the alcohol doesn’t get you drunk, and the sex...well, let’s just say “don’t bother.” To make matters worse, the only person who can see her—courtesy of a book he found in his school library—is a fourteen-year-old boy genius obsessed with the afterlife.

Unfortunately, what waits in the Great Beyond isn’t much better. Stuck between the boring life of a ghost in this world and the terrifying prospect of three-headed hell hounds, final judgment, and eternal torment in the next, Irene sets out to find a third option—preferably one that involves not being dead anymore. 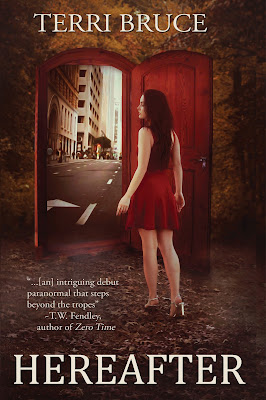 Praise for the Afterlife Series:
Bridget Jones’s Diary meets Neverwhere in a series readers are calling “Smart and Funny” and “Insightful, Refreshing, & Down-to-Earth.”

5 out of 5...[Hereafter]  is so good that I can't wait to make time to reread it. I highly recommend it. Not what I expected, in fact much much more.” ~Mallory Heart Reviews

“5 Stars… The first few pages of [Hereafter] will get you hooked… and will entertain you until the end. This book is absolutely superb and is a must read.” ~Reader’s Favorite

"Readers looking for a lighthearted book that still touches on some serious themes or for a novel with fantasy elements that doesn’t feature a sexy vampire huntress or a paranormal detective agency might try Hereafter." ~Bay State Reader Advisory

"4 out of 5...An amazing book...those who love the feisty heroine that we often read in Paranormal and Supernatural Fantasy novels will love Irene and the flavour that Terri Bruce has given her" ~The Phantom Paragrapher

Excerpt:
“Come.” Samyel gestured, indicating that they should follow him. “We must go.”
“Go? Go where?”
“Away. Inside. Or they will see.”
“Who will see what?”
The dark glasses revealed nothing as he stood impassively for a moment. “Everyone.”
Samyel was attracting a lot of attention. The crowd moving around them was giving him a wide berth, and he was the focus of a lot of strange looks, which just confirmed that he wasn’t dead—people could see him. Irene knew that it looked like a seven-foot tall man in a trench coat and dark glasses was talking to himself in the middle of the sidewalk. It wouldn’t be long before the cops came to investigate.
Irene gestured for Samyel to lead the way. “Fine. Let’s go.”
Irene heard another choke of protest and glanced at Jonah. There was a silent exchange of mouthed words, pantomimed gestures, and angry, exaggerated looks.
“Don’t be crazy,” Jonah hissed. “You can’t go with him!”
“You’re the one that always wants to stop and talk to every weirdo we meet,” she countered. “And what do you mean ‘you’? We’re both going.”
“Uh uh,” Jonah said. “This is your idea. If you get murdered, I’m not saving you.”
With an exasperated look, she motioned for Jonah to follow and set out after Samyel, who was nearly out of sight. Jonah reluctantly followed. Irene gave him a wry look as they trailed, side by side, a few feet behind Samyel. “You know, at some point, we’re going to have to talk about your propensity for picking fights with people bigger than yourself.”
“What’s propensity?”
“A really bad habit that you should stop.”
Jonah’s expression turned unreadable for a long moment, as if he was debating with himself, and then he looked away, stuffing his hands in his pockets and bowing his head to stare at the sidewalk as they went.
“I’ve changed the password, by the way, so you can’t do that again,” he said darkly.
She grabbed his arm, pulling him to a halt. “Jonah, listen to me. It’s not that I don’t appreciate you trying to protect me. I do. Even when it’s annoying and misplaced, like with Ernest. You’re the bravest, sweetest guy I’ve ever met, but I’m dead. You’re not. I’m already probably going to Hell for dragging you along on this adventure. Don’t add being the cause of your death to my list of crimes, okay?”

The tips of his ears had turned pink and his head was down, shoulders hunched. Then, to her surprise, he suddenly looked at her, his eyes inquiring as he searched her face. She didn’t know what 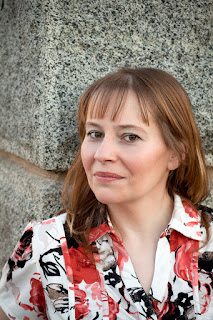 he was looking for, but he was gazing at her so earnestly that she blushed.

About the Author
TERRI BRUCE is the author of the paranormal / contemporary fantasy Afterlife series, and her short stories have appeared in a variety of anthologies and magazines. She produces hard-to-classify fantasy and science fiction stories from Downeast Maine where she lives with her husband and various cats. Her fourth novel, Whenafter (Afterlife #4), will be released April 2018.