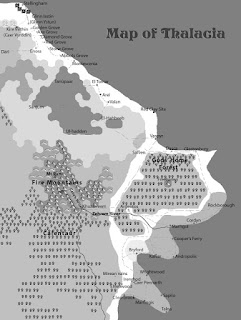 In previous posts about my world, I described how the Aglaril, a set of elven magic gems, were made and how the elves and humans collaborated. Everything was great until the wizards of Davenar attempted to put an end to war with a spell of peace and prosperity for all. The spell went horribly wrong, and the city was destroyed unleashing demons upon the land.

In response the elves, led by King Argol leaped in action, mobilizing their forces to combat the new evil that threatened the world. Taking Balodol, the magic crown in which the gems had been placed, Argol did battle with the demons until only one remained, the most powerful and the strongest demon of all, Zortan.

The battle between Argol and Zortan is chronicled in Book 1 of the Aglaril Cycle and reproduced here.


The elves were now camped on a flat, desolate plain.

Beyond the camp, rock and rubble were strewn about. Broken and charred trees stood as the last clue that life had once thrived here. All other plants and animals had been blasted clean from the surrounding land, leaving only a bleak and barren tableau where nothing and no one moved.

From the elven camp and out into the ruined city, a lone figure rode a black horse. A silver circlet with seven gems rested on the rider’s head. He wore no armor and carried no sword or shield. No other protection was required with Balodol atop his brow. The long, dark hair that blew in the breeze and the rider’s green eyes identified him as an elf. His fierce expression confirmed his identity: it was Argol.

The elven king rode quickly and unimpeded through the desolation of the human city. The galloping of his steed was the only sound that could be heard. The land sloped gently towards the center of the devastation where the initial explosion had occurred. Argol rode on for several minutes, barely looking about.

He drew near a large crater and pulled up on the reins of his black stallion. Giant hands with claws half a foot long rested on the edge of the crater. Equally large wrists and arms disappeared into the hole.

Argol’s horse snorted. The giant hands moved at the sound. Immediately Argol was off his steed and preparing to summon the power of Balodol. The gems brightened and appeared to come alive. The hands pushed against the ground and the rock underneath each palm crumbled a bit from the pressure. A giant figure emerged from the crater with measured slowness. It had narrow yellow slits for eyes and sharp pointed fangs that looked like spikes protruding over its lower lip. No hair covered the demon’s head and large pointed ears moved as a malicious smile crept over its thin, drawn lips. It seemed to be considering Argol’s strength when its voice boomed.

“No,” said Argol. “Only your end is at hand, evil one.” He concentrated and the light from the Aglaril illuminated the area.

Lightning bolts struck the ground where Argol stood, but the king remained unharmed. Sheets of flame scorched the land around the crater, but still Argol was unscathed. The gems in the circlet flared and a hole in the air formed, revealing a black void beyond. All the nearby loose rock and debris was sucked into the opening. The demon braced itself against the crater and laughed.

“Is that your best effort? It will take more than this to eliminate me.”

Argol knew that Zortan spoke the truth. It was just as Nolendur had said. He must be careful not to underestimate the demon. That meant using the full power of Balodol, dangerous as that was — but there was no other choice.

Argol’s jaw tightened with determination and he redoubled his concentration on the circlet he wore. The seven gems sparkled and glowed with the fury of the sun. Zortan was pulled out of the crater and into the air, tumbling head over heels repeatedly.

“No!” cried the demon. “I am Zortan. I am the strongest and the greatest being that has every lived. I cannot be defeated by a mere mortal.”

Despite his protest, Zortan was pulled towards the dark void. He struggled against the force that dragged him forward, but he had nothing to push against. He tried to fly away and failed. Some unseen force held him tight and prevented his escape.

Argol, meanwhile, felt the stress of maintaining his concentration mounting. His fatigue was like a physical weight, and beads of sweat formed on the king’s brow. Still, he did not relent. Argol could feel Zortan’s resistance like a dead weight — the proverbial immovable object — and he pushed against it.

Zortan reached the opening of the void. He peered into the darkness and gnashed his teeth. The pull on the demon was stronger now and it took all his strength not to be swept into the dark hole. Even so, Zortan could not stop his legs from entering the void. Argol saw the demon look about for something and noticed his opponent’s eyes shifting from side to side rapidly. The elven king wasn’t sure what Zortan was looking for, but it did not matter. In a few more minutes, the demon would vanish into the void and that would be the end of him.

Argol saw a smile come to Zortan’s face, a hideous, evil smile. In a single movement, one of the demon’s giant hands came up, as if to slap Argol across the face. The elven king saw the maneuver and dodged the blow, but Zortan hadn’t been aiming for the elf’s face and, a second later, the circlet was knocked from Argol’s head.

The effect was immediate. The winds and force that pulled at Zortan turned against Argol. He couldn’t concentrate and lost control of the magic that had created the void. Swept up into the air, Argol plummeted into the void, pushing Zortan through as well, just as Balodol struck the ground and shattered.


Thus ended the battle, banishing Zortan from the world and Argol along with him. What happened next I've discuss next time.
at March 30, 2018 No comments: