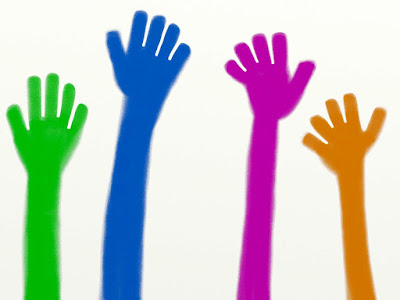 Today, I'd like to talk about adding diversity to your world. First, let me say that I don't expect any writer to change any character, especially established characters, to a person of Color. You may not be comfortable writing characters outside of your own life experiences. There is nothing wrong with that -- there's much to be said about writing what you know.

What I'd like to point out is that we don't live in a vacuum. When I lived in the San Francisco East Bay and out in West Sacramento, I was surrounded by all kinds of people. Native American, Latinx, Black, Asian, Sikh, Ukrainian, gay ― name a race/color/ethnicity/gender/sexuality/religion and I probably encountered someone of that group on a regular basis while I was out and about.

My first novel, a work in progress, is also set in a diverse world. Since my majors were fine and commercial art, color and form are important elements in my world, and that includes the people who reside there. Sacramento is diverse and so is the society that Bitter, my main character, moves through. The tamale man stops by to sell her a dozen tamales, her taxi driver is Sikh and the neighbors play music with a heavy bass rhythm. As a woman of Color, she also faces microaggressions both at work and off-duty based on her sex, age and color.

Small descriptive elements, such as the cop taking statements after a fender bender, add to the story and enhance the flow of the scene:

The blue taking statements looked up. "Out of the street and away from the accident." He pointed at the curb across the street. "You can film from there."

He straightened to his full height and looked down at the reporter. Sweat glistened on the blue-black highlights of his bald head. "Yes, I can. You can get out of the street and film from over there. Nobody is infringing on your right to report the news, so get over there before I have to notice you disobeying a lawful order."

The cameraman stepped back as the blue loomed over the pair.

"To the curb. I'm sure there's witnesses you can interview while we take care of the accident."

"I want to know your name and badge number," the reporter blustered. Bitter noticed that his bald spot was turning pinker from rage or sunburn, she couldn’t tell which. She hadn't noticed it during his reports on the evening news.

So with those few words, we know that the officer is tall, dark complected, bald and not taking any lip from the reporter. We can also ascertain that the reporter is probably white, starting to lose his hair and hot-tempered. I say "probably white" because race and color are not always the same thing…

While I encourage adding diversity by peopling your world with the regular folks you meet while you're out and about in your real life, be careful to avoid stereotyping. For example, take a look at the original Hardy Boys series. The bad guys were all too often "swarthy" IE not white and people of color (POC) are portrayed in racist and ethnic stereotypes. That's not a trope I want to encourage.

Next time, I'll share the ways some of my favorite authors have introduced their characters as POC without dipping into the usual "mirror, mirror, on the wall" techniques.