Putting the Spotlight On: The Jezebel Johnston series

Pirates, a strong-willed biracial teen and adventure on the high seas – how can you go wrong? 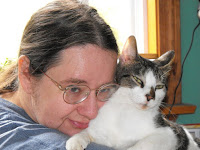 Nancy Hansen's historical fiction series Jezebel Johnston introduces us to a pirate queen in the making, from her home on Tortuga to her adventures as she disguises herself as a boy and signs up on the Devil's Handmaid, a pirate ship. Jezebel Johnston, the child of a pirate and a former slave who runs a bordello and tavern, decides to run away, following her pirate crush to sea.

Meticulously researched, the story doesn't gloss over the difficulties Jezebel faces, from hiding her sex from her shipmates to the brutality of the pirate life. Her crush is less than enthusiastic about her presence on board as Jezebel learns the harsh lessons of the life of a pirate. But the sea is in her blood, and Jezebel resolutely sets out to make her mark in the world, starting at the bottom like any proper lad.

The Call of the Sea!

Born on the pirate island of Tortuga, fourteen year old Jezebel Johnston is a beautiful mulatto sired by an English privateer named Long Tom Johnston and Mofina, the Madame of a well known bordello. For most of her young life, Jezebel was mesmerized by her father’s stories of life on the high seas. Eventually he sailed off on a new adventure and never returned.

Frustrated by her own boring existence, Jezebel conceives of a daring plan to escape the island. She disguises herself as a boy and signs aboard the pirate ship, Devil’s Handmaid, captained by the notorious Dandy Dan Abrams. Her disguise works and within hours she’s sailing away from all she knows as she boldly challenges the dangers and threats that lie before her.

Writer Nancy Hansen tells a story of clashing empires all seeking to expand their dominion into the New World. Amidst this expansion of wealth and influence, the pirates of the Caribbean were borne, a savage fraternity of outlaw sailors, murderers and scalawags who ruled the seas. Now comes the saga of a young girl willing to share their tempestuous adventures, cutlass for cutlass, until one day she will become the greatest pirate queen of them all. 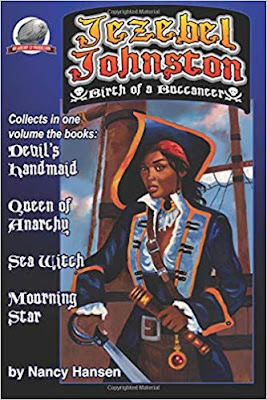 The first four books are also available as a bindup: Jezebel Johnson: Birth of a Buccaneer.

Hansen has stories in a number of Pro Se anthologies as well as New Pulp fantasy and science fiction and young adult novels. The Jezebel Johnston books, published by small press Airship 27 Productions, are intended for an older teen and adult audience.

I can't tell you folks how much I appreciate the comments and the sharing here. I've worked pretty hard on this series, trying to get the historical backdrop as close to correct as I can. Airship 27 has been behind it 100% since I pitched the idea, and surprised me this past fall by putting out an omnibus collection of the first four books. They have the fifth Jezebel Johnston manuscript, subtitled DANSEUSE (each book has a subtitle that pertains to the ship she primarily sails on), and the 6th book (no title yet) is currently in progress, somewhere about 1/6 completed.

I have a whole bunch of other writing projects going as well, and as time permits I'll fill everyone in on those too. Writing has long been a passion of mine and over the last 8+ years it's become a second part of life career; now that my boys are raised and the grandkids are gradually entering school. I sure do enjoy it, and hopefully what I'm pounding out on the keyboard is bringing some entertainment pleasure to some folks out there as well. :)
Read more
+
1
2
1
·
Reply

Ruth de Jauregui
5 days ago
+
1
2
1
Congratulations Nancy!! I have the first book and it's wonderful!

This sounds like a really cool an interesting series with an MC I could really get into.
+
2
3
2
·
Reply

Author Nancy Hansen is a guest on #OurAuthorGang and introduces us to her Jezebel Johnston series!
+
2
3
2
·
Reply

Today, Nancy Hansen shares her The Jezebel Johnston series, the story of a biracia pirate queen in the making. #OurAuthorGang
+
3
4
3
·
Reply

Jezebel Johnson wants adventure. Disguised as a boy she joins a pirate crew. Little did she know that she would become the greatest pirate queen. The call of the sea is in her blood.
+
3
4
3

Always good to see more of our 'Women Warrior' characters. These books would be a great addition to Grand Cayman's "Pirate Week' held every November!
+
3
4
3
·
Reply

Today on #OurAuthorGang the spotlight is on Nancy Hansen 's historical fiction series, which features the biracial teen who aspires to be a pirate. But there's one problem. She's a girl.

Meticulously researched, the series follows Jezebel's Johnson's adventures as she works to become the pirate queen of the high seas.
+
2
3
2
·
Reply