When building a whole world, I like to start with the big picture and work down. You don't have to do that, of course. You can start small and work up, but I start at the top and work out the details the way they would be if the world was real. So I usually start with the astronomy of the world. This includes things like:

What is the spectral class of the star the world orbits?

How far from this star is the world? This is another way of asking how many days are there in a year?

And while we are on the subject:

How long is a day? How are months determined? Typically it is based on the phases of the moon. If the world has no moons, you'll need another method to figure that out. You'll also need to think about what, if anything, affects the tides on the world (assuming there are oceans to influence).

What does the night sky look like? What are the constellations? How do they fit in the mythologies of the world? What are the signs of the zodiac?

How many planets are there in the star system your world belongs to? What are these planets like and how far away are they? Are any visible in the night sky from the world?

Some or all of these questions may be irrelevant for your world. Oz, Alice in Wonderland, and Middle Earth do not bother us with these details. And they rarely come into play in my fantasy novels. But they have and it is better to have answers at your fingertips than have to stop and fumble for answers.

Notice all of these questions place the world in a star system. You can design the planets that orbits that star and decide on the number of moons for your world. This can be fun and may even teach you a few things about our own planet.

For my world, I decided early that the sun, Arien, was like our sun, Sol, a yellow G3 star. And that my world was about the same distance from it as Earth is from our sun. The only change I made was I shortened the year by five days so the calendar math came out even. That meant my world was a little closer to Arien but not much. That would affect the seasons and temperatures a little but not by much.

Then I decided on two moons, Ibilik and Ezer. One of the moons affects the planet's tides and the other is too far away to do much of anything. The moons are always fifteen days out of sync with each other and the time it takes for each moon to cycle through its phases is exactly 30 days. That gives me 12 months of 30 days each.

To keep things simple, I kept seven days to a week because I found most people had a hard time if I changed the calendar too much. (My original plans were a 10-day week; the only problem with that no one could remember whether Cooksday was before or after Highday. So I abandoned it that part)

Then I designed the night sky for the northern and southern hemispheres. This ended up being important because my characters stargaze and my bard needs to know what the constellations are called and what stories there are around each. I went this far because the Greeks named most of our constellations and their mythology still surrounds them, if you care to learn about it.

So you can see that these details relate back to important aspects of the world as a whole. You may choose to ignore them, but if you don't you can add real flavor to your world.

Next time another deep dive. 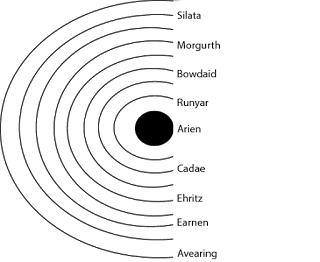