Ruth de Jauregui
With the seventh anniversary of the passing of science fiction author Anne McCaffrey (April 1, 1926 – November 21, 2011) just last week, I wanted to talk about this amazing author. Her 46-year career in science fiction has led to her books filling science fiction fans' shelves, beginning with the fantastic Pern books.

McCaffrey, who was born in the US, moved to Ireland with her youngest two children after filing for divorce in 1970. Her 20-year marriage with Horace Wright Johnson had failed. With the change in Irish tax laws to exempt resident artists and her own Irish ancestry, it was a prudent move. While she stayed busy writing, her little family struggled for several years. It was the Pern-based Harper Hall Trilogy that freed her from her financial woes. As Todd, her middle son, wrote in 1996, McCaffrey "first set dragons free on Pern and then was herself freed by her dragons." 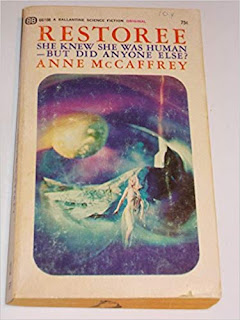 Several more short stories followed before McCaffrey wrote her first novel Restoree (1967). The stand-alone novel was inspired by her desire to write a strong female character. Todd quoted her as saying "I was so tired of all the weak women screaming in the corner while their boyfriends were beating off the aliens. I wouldn't have been—I'd've been in there swinging with something or kicking them as hard as I could." 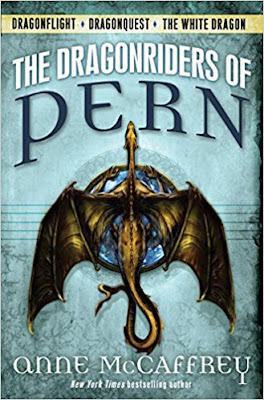 The Pern novels, like many of her books, began with a short story. "Weyr Search" was published in Analog Science Fiction and Fact in 1967. It took the 1968 Hugo Award for best novella. The following year the second Pern story "Dragonrider" took the Nebula Award for best novella. These two stories, plus the unpublished "Black Dust Crack Dust" became the first of the Pern novels, Dragonflight (1969). With input from famed science fiction author Andre Norton regarding the white dragon, Dragonquest (1971) followed, then several years later, The White Dragon (1978). The White Dragon was the first science fiction book by a woman to make the New York Times best-seller list. The Harper Hall trilogy was started before the publication of The White Dragon. Dragonsong (1976) and Dragonsinger (1977) were published before McCaffrey finished the Dragonriders trilogy. Then McCaffrey completed the Harper Hall trilogy in 1979 with Dragondrums. 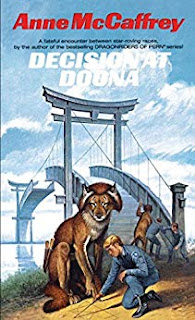 McCaffrey wrote a number of other Pern books, plus several other series and stand-alone books. Among her other popular series were the Brain & Brawn, Crystal Singer, Dinosaur Planet, Doona, Talent and Tower & Hive books. While she did write a few fantasies, she was firmly set in the science fiction genre. Despite the misconceptions of some sci-fi and fantasy fans, her Pern books were definitely not fantasy; the dragons were developed from the native fire lizards by genetic manipulation. 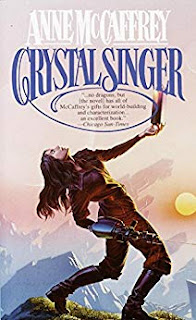 She was honored many times in her long career, including induction into the Science Fiction Hall of Fame in 2006 and receiving the Robert A. Heinlein Award in 2007. The Science Fiction and Fantasy Writers of America named her the 22nd Grand Master in 2005.

Although McCaffrey was scheduled to appear at Dragon*con in 2011, Todd posted on her blog in August about the cancellation. "Mum very specifically asked me to apologize to those who had hoped to see her there, saying: 'Sorry that old age came up and bit me on the a**.' The Directors at Dragon*con have said that she’s to rest and get better so she can come next year.” Sadly, McCaffrey didn't make it to the next Dragon*con; a stroke took her in November.

McCaffrey's last book, Sky Dragons, was co-authored with Todd and published posthumously in 2012.

I've read as many of her books as I can get my hands on! She was my inspiration for becoming an author of sci-fi and fantasy, and I still love re-reading her books occasionally.

I have read a few of her books and loved them. It is nice to see strong female characters.

Great article, Ruth! I love McCaffrey's brilliant work and she had some influence on my own writing, too.
+
2
3
2
·
Reply

Ruth de Jauregui
2 months ago
+
1
2
1
Me too! Strong and ornery women run in the family. She makes me want to write strong characters.

#OurAuthorGang today features an article by Ruth de Jauregui on one of my favorite sci-fi authors, AnneMcCaffrey.
+
2
3
2
·
Reply

One of my favorite authors -- the incomparable Anne McCaffrey. #OurAuthorGang
+
2
3
2
·
Reply

Anne McCaffrey was an amazing author -- and a strong woman. Her characters literally guided so many women through their teen and adult years!!
+
1
2
1
·
Reply

Thank you! And upon researching her, I realized that I'm missing some Pern books. How did that happen? SMH

Thank you so much for sharing!!

Reply
Thank you so much for sharing my post!