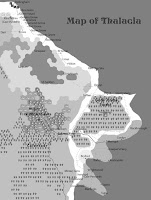 I populated my fantasy world with nine races of various types, which I described in my last post. They had little contact with each other to start because were separated geographically.


Eventually, however, other races began to change this and caused havoc. Orcs burned and cleared the forest, causing the elves to go to war with them. And goblins moved into the hills near the dwarves stronghold, raiding their hunting parties, and in some cases, their mines as well. The dwarves had no tolerance for this and went to war with the goblins.


Lizard men lived in desert and other inhabitable environments keep to themselves, but were hunted by dragons as abominations of the saurians blood line. Many dragons believed at this race is the result of magic spells going horribly wrong.
Ogres and giants occupied mountain locations and fight among themselves.

Against this background humans emerged, establishing the city of Davenar. Soon they made friends with the elves, who teach humans magic. The humans helped control the orcs and goblins, bringing some measure of peace to the land.

Humans and elves collaborated more and more and a golden age began where the threats in the world were minimized and the joys were maximized.

Then in an act of hubris, the wizards of Davenar attempted to put an end to war with a spell of peace and prosperity for all. The spell went horribly wrong, and the city was destroyed unleashing demons upon the land. Some humans survived to father other groups in later years.

But the damage was done. The Golden Age was over and the elves rose to the challenge, doing battle with the demons.

What happens in this series of conflicts is the subject of my next post and forms a key piece of the background for my fantasy novels, the Aglaril Cycle. Hope you’ll join me to learn more about one of the major events that shapes the world forever.
at March 02, 2018 No comments: