Mary Corré Griffith (1772-1846) was the first (known) American woman to write a utopian novel as well as the first author to project the main character into the far future.

Not only did her book Three Hundred Years Hence predict a strongly feminist future, it also presented a peaceful resolution to slavery and a voluntary return to Africa by African-Americans, where they were able to build a successful society without interference from white society. The story also predicted the extinction of Native Americans, which while true in the case of some tribes, fortunately did not become a reality for all the tribal nations.

From the 2017 paperback edition:
A sleeping young man is sealed in his house by an avalanche and awakens 300 years later in the year 2135 when the house is uncovered by excavation. Through this character, Griffith looks into the future of America from her time in 1836 as America's first known female utopian writer. She foretells a new form of power replacing steam engines, prohibition of liquor, women working jobs outside of the home, self-propelled farm equipment, income taxes, buildings made of fireproof materials, public construction and ownership of roads, breakup of monopolies, and other changes that were to come to America. 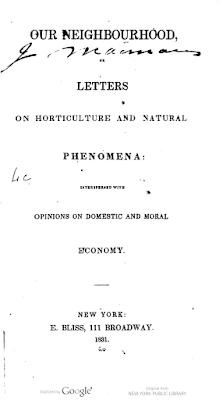 First published in 1836 as part of her collection, Camperdown, or News from Our Neighborhood, Prime Press republished the novel in 1950 in a limited edition of 300 copies. Authors and critics Anthony Boucher and Jesse Francis McComas called the 1950 edition "an odd and delightful item of 1836 dealing with a strongly feminist future."

In addition to Three Hundred Years Hence, Griffith was deeply interested in the natural sciences, including horticulture, natural history, and the earth sciences. She conducted experiments on her Charlieshope estate in New Jersey and published the results in newspapers and scientific and literary journals.