And Dealing With Bullies 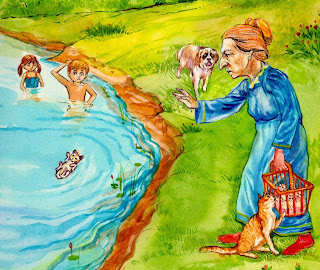 Daniel looked up, wiping the water from his eyes. He saw a woman walking toward the water with a basket in her hand. As she got closer, the children saw an orange-colored cat with white paws and chest that was following the woman, crying and hissing. The cat was clearly in distress. She tried to claw and bite the woman’s legs, and even when the woman kicked her, she didn’t give up.
The cat’s loud cries made the hairs stand up on the children’s arms. They didn’t understand what was happening, but they felt something was very wrong. 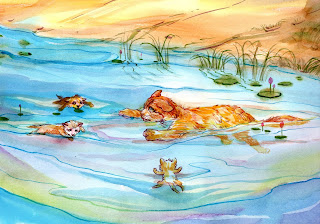 The woman ignored the cat, and when she reached the edge of the river, she took a tiny, meowing kitten out of her basket and threw it into the river as far from shore as she could. The kitten flailed in the air, desperately crying, and then splashed into the water.


Bianca and Daniel watched in horror. The woman grabbed another kitten and threw it into the river.
The woman laughed cruelly as she threw the third and fourth kitten into the water. The scene sent chills down the children’s spines.
The adult cat gave out a painful cry, darted down the riverbank and jumped into the water. She reached one of her kittens, took it into her mouth, and started swimming ashore. 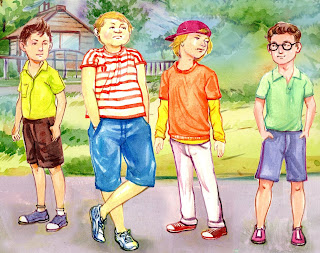 The group of kids stood in the shallow water looking just as guilty as Peter. Daniel punched Peter’s shoulder playfully and said, “No name calling. Okay? Mark is who he is, and he will be a bully until he wants to change.”
“Sure thing,” Peter promised. “I’m not going to hang out with that bully anymore, no matter what he says or does. I’m scared of him, but I can run away if he tries to hurt me.”
“Yes, you can run a lot faster than Mark,” Daniel stated. “You’re the fastest runner in school. Let’s play,” Daniel picked up the ball and threw it at Peter spraying him with water.
Peter laughed and splashed Daniel and the other kids. They splashed him back and soon they were laughing and happily playing in the cool water.
Bianca watched Daniel from shore and smiled proudly. Her BFF always found the right way to smooth things out and make everyone feel comfortable around him.
Peanut rumbled softly, staring at the bushes near the water. Bianca saw Mark and his two cronies standing by the bush.
Mark looked angry as he was staring at the kids who were playing in the water.
Scott and Aiden stood next to him with gloomy expressions on their faces. Bianca thought, they want to play with us, I know it. I wish they would stand up to Mark. Those two boys don’t seem to be mean, they’re just too afraid of that big bully. Bianca sighed and patted Peanut’s head sadly.