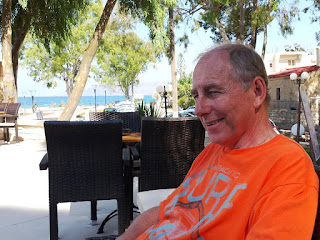 The Portsmouth Hub in England arranged a fantastic evening on the 27th of October 2016, with a talk by Andy McNab, not his real name, who served as a trooper with the SAS. He proudly told us that he was the 38th bestselling author in the UK, ever, and gave the audience a brief history of his life.
I met him beforehand and it was obvious that his attitude was down-to-earth and positive. He also signed my copy of his book, Crossfire.

Andy McNab has written an amazing 46 books - 24 fiction, 6 nonfiction and 16 for young adults. I asked him whether he has a set plan when he writes. No, he says, before saying that he starts in January, aims to knock out 80k-90k words by Easter, and then it's over to his publisher for publication in June. As he explains - I write a prologue, a three-act book, and end with a short epilogue, and bugger off before anyone gets bored.

What do you get when a baby boy is dropped off in a Harrods shopping bag on the steps of Guys Hospital in London, is adopted, allowed to do whatever he wants, turns to burglary, sent to borstal, and ends up in the army?

He recalled the day his life changed when an officer in the Royal Green Jackets spoke to all the new recruits.

“Those in the school next door, think you lot are ignorant. They’re right. They also think you’re stupid, they’re wrong. You’re only ignorant because no one has taught you. That changes today.”
As Andy told us, he loved page 3 of the Sun newspaper, for he didn’t need to read to see the pictures of the semi-naked models. As words meant nothing, he invented his own. He recalled the time that he sat up in bed after reading his first Janet and John book and shouted. “I can read.” He grinned as her remembered the officer telling him that’s exactly what would happen some months previously.
I loved the description of the 3 pieces of toilet paper per recruit order. He was told to use, one up – one down – and one to shine your bum.

Over the next few years, he served several tours in Ireland, winning the Military Medal (he later won the Distinguished Service Medal as well) before wanting a new challenge.

And here Andy destroyed the myth about the special application to join the SAS. “You fill in a simple form and send it off. In due course, you get a simple reply. Turn up at this time at this place and you will then be judged on whether you can pass selection.” He failed the first time but nailed the second attempt, and became a member of the Air Assault Group, B Squadron, where he served for nine years.

He worked in drug operations, counter-terrorism and undercover work in many parts of the globe, as well as becoming an army instructor.

Yet Andy McNab really came into the public eye after his exploits in the 1st Iraqi war.
Bravo Two Zero was the call sign for an SAS patrol deployed into the deserts of Iraq, in January 1991. They were there to set up an observation post to check the MSR - main supply route - from Bagdad to the North West, as well as cutting a communications line. Destroying mobile rocket -launchers was also in their brief, but finding them would be next to impossible as their designated area was about 160 miles.

In the eight-man team of Bravo 2 Zero, three died, one escaped and the others, including Andy, were finally released, yet all suffered many injuries. He glosses over the details of his incarceration, and who would blame him due to the horrendous torture the team had to endure.

Andy jumped at the chance to turn his experiences into a book.

Bravo Two Zero was his first book, and as he put it, “They asked me to write my account, and I said, why not?” This is a feature of Andy McNab’s thoughts. “If they ask me to write another book, I’d be stupid to say no, so I respond with, why not?”

Needing to pay off his mortgage, Andy decided to take a good pay off and to once more fight drug gangs in Colombia, but the book offer changed his mind, it was less dangerous.

Since then he has traveled extensively, either giving technical advice on movie sets like HEAT, assistance to film crews in hostile environments or being part of a team that walked to the south pole not that long ago. His next plans include climbing a mountain in the Arctic Circle apparently.
He is continuing to write books and told us that he had just signed up for another three-year deal. Clearly, he is one man that cannot sit still for too long.

Near the end of his talk, he spoke about psychopaths in general before taking us on a trip inside his head. He used the following as an example of how his own mind works.

“If I have a secretary and she tells me that her cat has died, I don’t care. It means nothing to me. However my mind tells me to do something, like buy her some chocolates, because I know she’s upset, but as for the cat, I don’t care.”

Andy describes this as cold empathy. His brain has been scanned apparently, and this confirms the emotion or lack of it. I thought about this and came to a conclusion. If you are working in an environment where death is a possibility every day, then surely you begin to distance yourself from nice thoughts, for you concentrate solely on personal survival. You become immune to all the blood and gore and do the job in hand.

That’s my view, yours may be different.
But I know one thing, with people like Andy McNab around, I’ll feel safer in any future crisis.