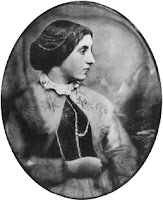 Ancient Egyptian mummies have been the fodder for a number of 20th century stories and movies. What most fans don't realize is that the original Mummy novel was written in the 1800s – by a woman!

Jane Webb (1807-1858) was the child of manufacturing businessman Thomas Webb, Esq. and his wife. After her mother's death in 1819, she traveled in Europe with her father for a year. Although a wealthy businessman, he lost his fortune after their return to England. She was only 17 when her father died in 1824. She was quoted after her father's death and the realization that she was penniless: "…on the winding up of his affairs that it would be necessary to do something for my support. I had written a strange, wild novel, called The Mummy, in which I had laid the scene in the twenty-second century, and attempted to predict the state of improvement to which this country might possibly arrive."

She had been writing since age 12 and published her first book of poems Prose and Verse in 1826. It was only a year later that she anonymously published The Mummy!: Or a Tale of the Twenty-Second Century. The Mummy drew many favorable reviews. It was originally published as a three volume set, a common practice that allowed readers to easily carry a small volume, rather than a large unwieldy book. 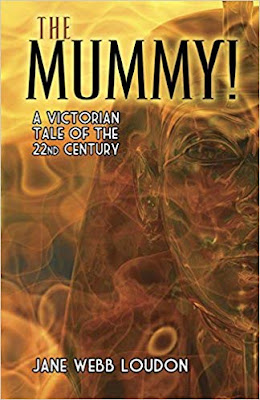 The Mummy provided an imaginative glimpse of the future, with somewhat liberated women (no more Kings -- the nation's leader was selected from the women of the Royal Family, yet marriages were arranged), scientific and technological advances, travel by balloon and a form of communication that we now know as the internet. The mummy itself was not the horror of Mary Shelley's Frankenstein, but an adviser. However, like many political creatures, Cheops had his own agenda that was revealed at the end of the story.

Loudon's story "The Grotto of Akteleg. A Hungarian Legend" was included in The Forgotten Gothic: Short Stories from British Literary Annuals 1823-1831 (2012). The original story, published in 1828, was credited to "Author of 'The Mummy.'" She also wrote the novel, Stories of a Bride (1829).

The Mummy was reviewed in The Gardeners Magazine in 1829. Her descriptions of the inventions caught the attention of Scottish horticulturalist, landscape designer and writer John C. Loudon. He asked a friend to invite the author to lunch, thinking that Wells was a man. They met in 1830. She said, “It may easily be supposed that he was surprised to find the author of the book a woman; but I believe that from that evening he formed an attachment to me, and, in fact, we were married on the 14th of the following September.” 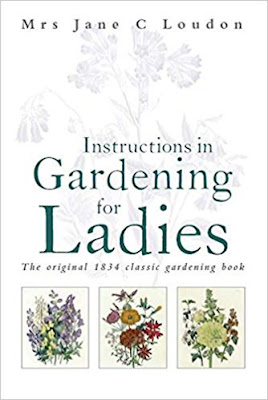 After their marriage, she laid down her fiction career and after immersing herself in her husband's work, began writing gardening books for ladies. The Victorian obsession with gardening and exotic plants attracted many gardeners, but most books of the era were not written for the layman. Of her eight books on gardening and botany, The Ladies' Companion to the Flower Garden (1841), proved extremely popular with gardeners. In only 10 years, it had reached five editions and nine by 1879, selling more than 20,000 copies.

John Loudon's death in 1843 left her and their daughter nearly penniless, due to the debt incurred by the cost of illustrations in his work. She continued writing her garden books and began covering the first English horticultural shows as a journalist. Though her work as a garden writer was an enormous influence in the gardening world, she died in poverty at age 59.

John's and Jane's work also influenced their only child, Agnes Loudon, who authored several children's stories and books. Her first story "The Lost Gloves, or We Shall See. A Story for Little Girls" was published in 1845, when she was only 12 or 13. She also contributed most of the stories in Tales for Young People (1846) and Tales of School Life (1850).

Another fascinating article on #OurAuthorGang. Ruth's Women in Science Fiction series is a must read!

It’s so tragic that she spent her whole life writing only to die broke. That’s why I’m not quitting my day job. Sigh. Great post Ruth

Another great female sci fi author who was ahead of her time. You’ll never guess what Jane London wrote. Find out on #OurAuthorGang

Today on #OurAuthorGang, author Ruth de Jauregui​ once again shares with us an all but forgotten writer of science fiction --- Jane Webb Loudon.
+
3
4
3

This is an incredible article, Ruth! Sounds like something I'd really enjoy reading. Your research is amazing!
+
1
2
1

Great series, Ruth! I enjoy reading about women authors of the past.

My own contribution to #OurAuthorGang today. Did you know the first mummy book was written by a woman? Yeah, me neither until I started this fun series about women in science fiction!
+
1
2
1
·
Reply

I'm having so much fun writing about these wonderful authors. Loudon was especially fun because I write garden articles and have a garden book out and love speculative fiction!!
+
1
2
1
·
Reply

This is so fun, and I still have lots of great writers lined up! Thank you!

I love your series about women writers! I had no clue that the Mummy was written by a woman!
+
4
5
4
·
Reply

Ruth de Jauregui
5 months ago
+
1
2
1
Honestly, I didn't realize it either!! I'm having a lot of fun with this series!

+Ruth de Jauregui women writers were kept in the corner when publishing was dominated by men. Now we have a voice :)

Wow another fascinating woman and a book that catches my fancy. Thank you for sharing Jane Webb Loudon with us Ruth. I have added it to my evergrowing list of things to read.
+
3
4
3
·
Reply

Thank you! My to-be-read and I've-gotta-get-this-book grows daily!!

Another great piece of history learned. Thanks Ruth.
+
3
4
3
·
Reply

Ruth de Jauregui
5 months ago
+
1
2
1
I love sharing these women and their stories!

Ruth de Jauregui
5 months ago
+
1
2
1
And she wrote in my two favorite topics -- speculative fiction and gardening!!

I just love reading about these literary pioneers. I was really impressed to see she wrote the original Mummy! Thanks Ruth for showcasing these amazing women!
+
4
5
4
·
Reply

Ruth de Jauregui
5 months ago
+
1
2
1
Reply
I honestly had no idea until I was researching more writers. I'm enjoying this journey!

+Ruth de Jauregui I can just imagine. It's so cool!

Thank you! I love writing about these pioneers in science fiction.