Children are attacked by brute bullies every day and defend themselves different ways.
Children's book for ages 4-12
by
Erika M Szabo
www.authorerikamszabo.com

When Bianca, Daniel, and Peanut, the St. Bernard, are confronted by Mark and his cronies, the BFFs stand up to him with the help of Peanut. 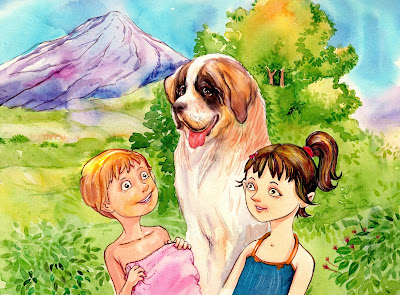 “I’m glad school is over,” Bianca said to Daniel as they walked on the sidewalk toward the river with towels on their shoulders. Peanut, as usual, walked with them staying close to Bianca.

“Me too,” Daniel said to his best friend with a sigh. “We don’t have to study or do homework for the entire summer, and I don’t have to deal with Mark. He said he will spend the summer vacation at his grandma’s house. Luckily it is far away in another town.”

“It makes me so angry that he’s getting away with hurting other kids, and he’s been picking on you for the past few weeks.”

“My ears were ringing for days because I hit my head on the desk,” Daniel said. “And the teacher didn’t believe me when I told him that Mark pushed me, so I didn’t tell my parents. It’s best to stay out of Mark’s way. He is very strong.”

“I don’t understand why those boys hang out with that big bully,” Bianca growled under her breath, feeling frustrated. “He gets them in trouble all the time.”

“Mark told Peter that because he is strong and wild as a wolf and nobody can mess with him and his boys, he named his group the Wolf Pack. But I think he got the name from a movie. I guess the boys feel safe with Mark because he’s strong,” Daniel sighed. 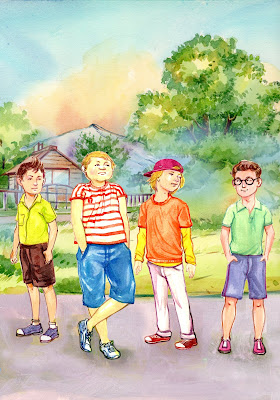 “Oh, look! The BFFs are going for a swim with their stupid mutt!” Mark yelled.

Bianca looked back and saw Mark standing by the fence, surrounded by three smaller boys.

“The loooovebirds,” chuckled Scott, one of Mark’s skinny friends, wearing a purple shirt. He looked at the husky boy with admiration.

“They think they’re better than us just because Danny boy won the spelling bee and her girlfriend came up with that stupid science project,” Mark growled.

“Yeah,” Aiden, the boy in a green shirt, agreed. “They’re not better than us.”

“Stupid geeks,” Scott said as he looked at Mark for approval.

Mark sneered and raised his arm. Two of his cronies happily gave him a high five one by one, except one. Peter pushed his glasses up on his nose nervously and shifted his weight from one foot to the other. 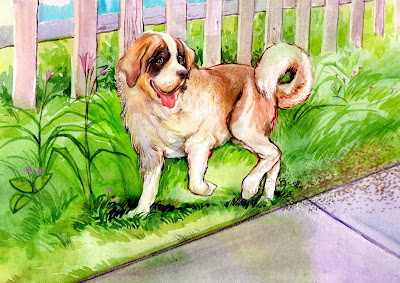 “Hey!” Hearing Mark’s angry shout, Bianca and Daniel turned back and looked at the group of boys.

“Hey,” Mark yelled again. “What are you two whispering about?”

“It’s none of your business!” Bianca said angrily.

“Yeah?” Mark yelled. “I’m going to tell my dad that you’re walking your mutt without a leash. He’s a policeman, you know.”

Bianca’s blood boiled with anger, and she lashed out at Mark. “Yes, we know that, Mark. You told us many times, but your dad knows that Peanut wouldn’t hurt anyone.”

“He’s just a big, dumb dog that should be locked up. Who gave him that stupid name, anyway?” Mark cackled.

“Or what?” Mark pointed his round chin forward but cowered back when he heard Peanut’s bark that sounded like thunder. The huge dog took a step toward him.

The giant dog stopped and looked back at Bianca with a twinkle in his eyes, and then he looked at Mark again. A low, threatening rumble escaped the dog’s throat as he opened his mouth showing his sharp teeth.

Mark’s usual arrogant expression changed. He looked frightened and flattened his body against the fence. The three boys slowly inched their way farther away from Mark who held onto the fence and didn’t move. 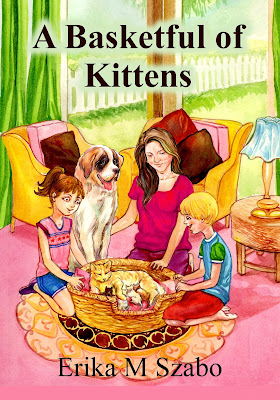 Brute Bully Boy #OurAuthorGang
Children are attacked by brute bullies every day and defend themselves different ways. Children's book for ages 4-12 by Erika M Szabo www.authorerikamszabo.com When Bianca, Daniel, and Peanut, the St. Bernard, are confronted by Mark and his cronies, the BFF...
+
2
3
2
·
Reply

Indeed Mary Anne. It is much worse today because of cyber bullying. Many young teenagers are bullied into committing suicide due to relentless and cruel comments on their social site pages and blogs

Nice meaty excerpt from this vital book about an ongoing, widespread problem. An admirable work, Erika. I hope its distribution is vast, as it deserves to be.
+
1
0
1
·
Reply

Thank you Ted! Book marketing is also a growing problem but I'm doing my best to get this book into the hands of children :)

Great excerpt, Erika. An important issue that needs to be addressed in every way possible. It needs more attention, more discussion and more education. This problem is so different than it was when I was a kid: it's much more prevalent and much more dangerous, too. Kids need to know how to stand up to bullies the correct way.
+
2
1
2
·
Reply

Yes, bullying is a lot more dangerous today Joe. Before the internet and super-smart phones and gadgets, we saw them coming and we knew who the bullies were. Now it's totally different when kids have multiple social site profiles, websites and so on. I've seen a very sad post recently about a 14 years old girl who tried to kill herself because of bullying. Another girl took a picture of her in the mall's bathroom sitting on the toilet and texted it to all her contacts and posted it on Facebook, Twitter and Instagram. This poor kid got hundreds of messages calling her names and very nasty comments were made on the posts. She was defenseless and felt so devastated that she cut her wrists in the bathtub. Luckily her parents arrived home in time to save her and I hope she's getting help and tries to deal with this awful experience. But the emotional scar is there and it will stay with her for the rest of her life. It is very sad. Children nowadays need a lot more education about bullying and it has to start at a very early age.
Read more

Jeez! I am glad I'm not a kid today, and glad I don't have kids or grand kids. Bad enough worrying about all my little cousins, not to mention my nephews and my friends' kids.

This is an excellent take on the bullying problem. And great the the BFF didn't put up with calling names, no matter how funny it was.

Sadly, some kids who are bullied will turn into bullies when they get a growth spurt or just turn about the abuse that they've been getting. We, as adults, have to do better to stop this problem.
+
2
1
2
·
Reply

Indeed Ruth! I'm so glad that young readers picked up on that too.

Erika M Szabo
1 year ago
+
1
2
1
Thank you Toi! Sad and very real. So many children are bullied and it is getting worse. Now children are nit only bullied on playgrounds and in schools but on the internet too. We need to teach our kids not to be afraid and speak up against bullies.

All bullies are cowards. Nice way of showing the problem Erika.
+
2
1
2

Such a great way to tackle the topic of bullying. I also really love the artwork!

Today on A Small Gang of Authors, Erika M Szabo gives us an important excerpt from one of her children's novels, wherein her characters deal with the growing problem of bullying.
https://asmallgangofauthors.blogspot.com/2017/08/brute-bully-boy-ourauthorgang.html
+
4
3
4
·
Reply