I have a bucket list of historical buildings that I want to visit ~ No jumping out of aeroplanes for me ~ I would much rather explore the remains of ancient castles, battlefields, and abbeys. At the very top of my list was Melrose Abbey in Scotland. 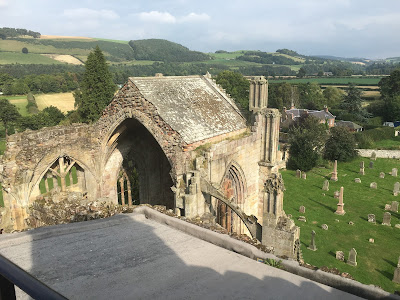 Why Melrose Abbey? To be fair, I have no idea. I do have a bit of a thing for ruined Abbeys, always have. Maybe, in this case, it has something to do with Robert the Bruce ~ his heart is buried at Melrose. Or perhaps, it is because when asked to name an Abbey in Scotland, Melrose is the first one I think of. Whatever the reason, it was on my must see list.

We spent two nights in the Scottish Borders and boy did we pack a lot in. But I was determined that one of those days was going to be reserved for Melrose.

We woke up bright and early on the day we had planned to visit Melrose. The weather was fine, a little bit on the chilly side, but at least it wasn’t raining. We packed the kids in the car, put Melrose in the Sat-Nav and off we went. But the thing is with Scotland, you can't drive 100m up the road without a sign pointing to yet another historical site, and I am afraid, we did get rather distracted. But it was so worth it for views such as this... 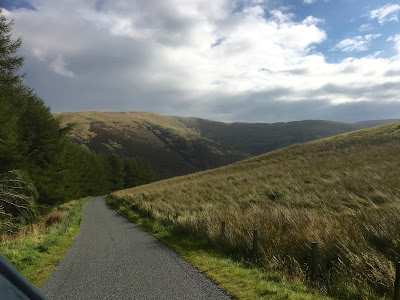 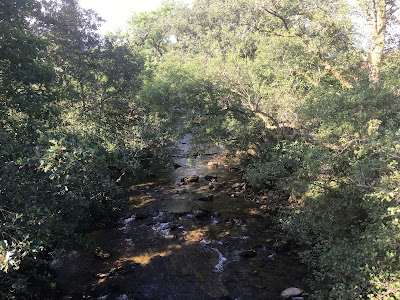 Our first stop of the day turned out to be an unplanned visit to Hermitage Castle. Hermitage Castle has a rather sinister feel to it ~ it certainly has a rather gruesome history...there was that whole witchcraft incident in the 14th Century, which saw the Lord of Hermitage, William De Soulis, boiled in lead by the locals ( or so the legend goes). 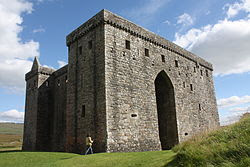 Hermitage Castle
(Photo courtesy of Wikipedia ~ My photos were a little blurry!)

Once we had explored Hermitage Castle we were back on the road heading for Melrose ~ but then we saw a sign to Jedburgh Abbey ~ so of course, we had to visit that as well. 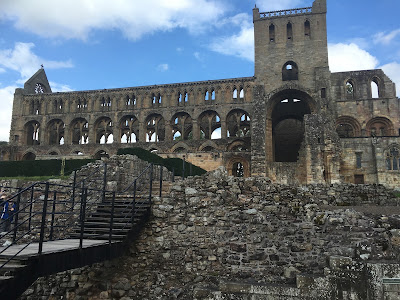 And then while we were there we visited Mary Queen of Scots House ~ it would have been rude not to. When I say Mary’s House, it wasn’t actually hers. She just so happened to visit a sick friend there once.

So much for taking the day to explore Melrose!

We finally arrived in Melrose in the middle of the afternoon. Melrose is a small town but the amount of traffic was staggering, and there didn’t seem to be an awful amount of parking, but as luck would have it, we finally managed to find a parking spot. For a moment I didn’t think we were going to. 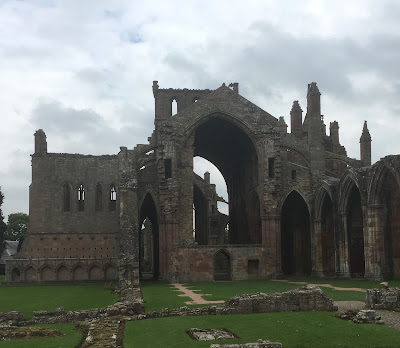 Melrose Abbey was stunning. As soon as I entered the property I had a stupid grin on my face ~ I had finally made it here! My husband, bless him, knew how much I was looking forward to visiting Melrose, told me he would take care of the children while I took the audio tour. So while he and the kids went on a hunt for the bagpipe-playing Pig and other such notes of interest as pointed out by the children’s quiz, I took my time and explored the Abbey.  The audio tour brought the Abbey back to life for me, and I learnt a lot about the Cistercian monks and lay brothers that once lived there. I am sure this new knowledge will make its way into a book one day! 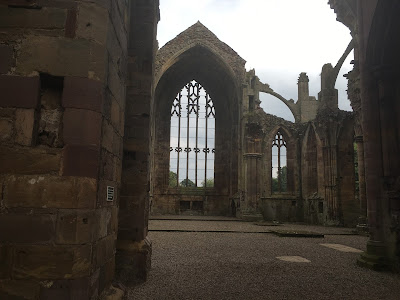 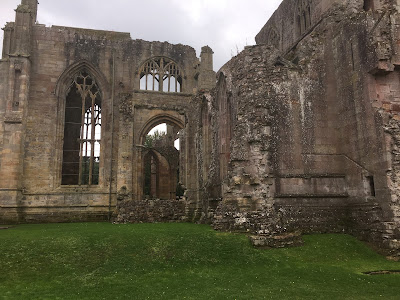 We spent just over 3 hours at Melrose and I enjoyed every single minute of it. I could have spent longer there, but the road was calling us as our next stop over was in Ayr and that was a good three hours away.

The Du Lac Princess
(Book 3 of The Du Lac Chronicles) 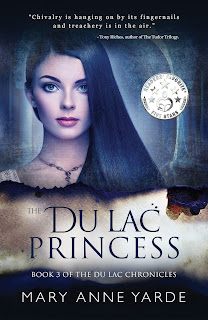 The ink has dried on a Amandine's death warrant. Her crime? She is a du Lac.

All that stands in the way of a grisly death on a pyre is the King of Brittany. However, King Philippe is a fickle friend, and if her death is profitable to him, then she has no doubt that he would light the pyre himself.

Alan, the only man Amandine trusts, has a secret and must make an impossible choice, which could have far-reaching consequences — not only for Amandine, but for the whole of Briton.