Our Guest Today is Stephanie Morris

New Orleans...
The moment you read that you probably thought about pralines, warm beignets, Po’ Boys, crawfish and the French Quarter. Right?

Well, so do I. But I also think about one other thing…

As I write this, it’s hard to believe that August 29, 2017 was the 12 year anniversary of Hurricane Katrina making landfall. Yet, New Orleans is still struggling to revive itself. Just a few months ago severe flooding was an issue again. Not because of a Hurricane, but because of faulty water pumps that simply weren’t doing their job.

This is just the tip of the iceberg.

Other issues that have plagued this beautiful city since Hurricane Katrina include but are not limited to: a decrease in police officers, a increase in violent crimes, vacant homes, dilapidated neighborhoods, displaced citizens and an increase in severe health issues due to mold and other airborne pollutants.

But in spite of these issues I LOVE New Orleans!

I visit this city at least once a year. I have family and friends in the area, so it’s a city that is near and dear to my heart. So when I received the opportunity to be a part of a box set that had to take place in New Orleans. I jumped on board. I was more than willing to take on the challenge. I saw this as an opportunity to tell a story about a city that I'm truly fond of.


Sadly, that boxed set is no longer available, but from one story a series was born, about 5 male shifters and their mates. You will meet five heroes that are doing their best to restore New Orleans to the vibrant city that it was before Hurricane Katrina and meet their mates.

As you travel with me on the journey through this series I hope that you will fall in love with the characters and the city of New Orleans as much as I have.

Synopsis:
When Serafine Hardy’s best friend tells her all about the hot new club that lets humans and shifters mingle she thinks her friend has lost her mind. As a person who doesn’t believe in the paranormal she thinks her friend has bought into one folklore too many. Still, she feels a thrill at the possibility of an encounter with a hot guy. And what better way to get back to get over her sexual drought than with a ruggedly sexy man?

It doesn't take long for Pierre Mercier to notice Serafine the second she walks in the door of Club Primal. Her luscious curves capture his attention in a way that he never expected. It also doesn’t hurt that she’s his mate. Now he just has to get her to understand what that means because there is just one huge problem. 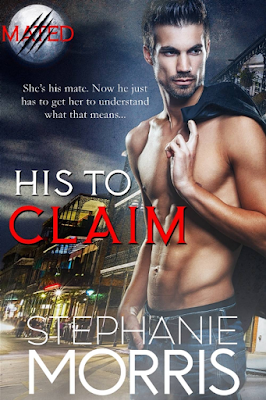 Bio:
Stephanie Morris enjoys creating a story that combines a sensual energy with a captivating storyline. Sometimes her heroines have an edgier persona to them and sometimes they are of a softer essence. But all the time, her heroines are like real women, just trying to make a living and keep on going no matter what challenges life brings them. She believes in romance and happy-ever-afters. In Stephanie’s opinion, there is nothing like curling up with a good book that you can’t put down, and she is addicted to writing them.

Visit Stephanie at her http://www.stephaniemorris.webs.com to find out about her latest book releases, sign-up for her newsletter or to win free books and other giveaways.