Welcome, Andi! So good to have you with us today. 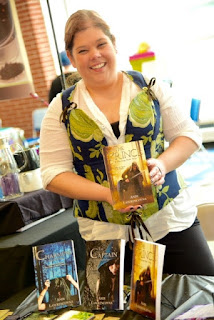 Andi Lawrencovna is a fantasy and science fiction writer from Ohio. To date, her books include: CHARMING--A CROWN AND DAGGERS BOOK ONE, THE FIRST BALL--a NEVER LANDS SAGA BOOK ONE, and THE DRAGON'S SACRIFICE--A BREATH OF FYRE  NOVEL in the NEVER LANDS SAGA.
Andi works closely with WriteNow Publishing, BUT maintains her independent authorship. She currently has three novels and two short story to her name, and her next novel, SO SWEET, will be out later this year. SO SWEET is a tale as old as time whose characters are as equally ancient and waiting to be released. Happily-Ever-Afters have never been bleaker, though Andi promises there’s always hope for rainbows and unicorns in THE NEVER LANDS.
Andi currently resides in Northeast Ohio with her dog and an imagination that has gotten her into more trouble than not. Her education includes a BA in English from Denison University and an MFA in Creative Writing from Pine Manor College. She works as a legal secretary during the day and removes her glasses at night…wrong genre.
Due to the mature content of her books, they are for 18 years of age and older.
She loves hearing from her readers and may be reached at: 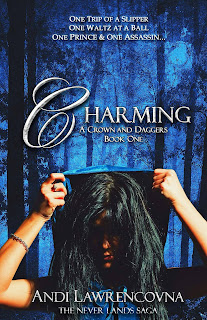 Once upon a time, or so the story goes, there was a prince who threw a ball to find a wife.
He was a young prince, by his peoples’ standards, and though he had no wish for a bride, he was honor bound to make the attempt to find one. Of course, Prince Kit knew that it was not just honor that bound him to the duty. Prophesied or cursed, who could say. But since he was a babe, assassins and soldiers had come for him: in the dead of night, in the middle of court, amidst the steps of a waltz. They wished to end his life and with it end the lives of his people and the land he was meant to rule. It was a heavy burden for a young man to bear, worse for a prince kept cloistered for his own good.
But a wife,...well, a wife would provide an heir, and perhaps prevent his peoples’ doom.  And so, he danced with maiden after maiden at ball after ball  until he danced with her.
She came out of the Darkness, a vision in a black dress and glass slippers, to join the throng for the Prince’s celebration.
The first night she hid a small vial filled with arsenic in the folds of her gown, but it was knocked from her hand before she could upend it into his glass of champagne.
The second night she brought a stiletto hilted in her garter that she never thought to draw and returned to her rooms un-blooded.
The third night Eli ran from him, found her horse, and fled back to the forest from whence she came, desperate to escape his charming smile and the emotions she refused to acknowledge in his gaze that seethed in her heart, too.
He gave chase.
What is an assassin to do when her prey hunts her down?
One waltz at a ball. One trip of a slipper. One Prince. And one Assassin.
Charming…simply, Charming.