Paint your world with color 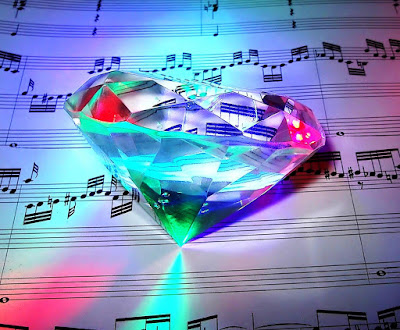 My beautiful daughter is a singer. Her vocal coach always told her that while she might be singing to a track, she could use the expressiveness of her voice to color the song and make it her own. As a writer, I use words in a similar manner ― to color my world.

I don't know about everybody else, but when I read a movie rolls in my head. Color and descriptive words add to the story, helping me visualize the scenes as I move through the author's world.

As I write, if I close my eyes, I can see the developing scene in my mind. Then it's a matter of getting the words on paper, expressing not just the action, but also sight, smell, touch, temperature and more. I add not just the descriptive words, but also the people that inhabit my real life experiences to bring my character's world to life.

Bitter's life is filled with color, from her apple green Maverick Grabber to the pink and purple hair of her brother's wife's cousin's daughter. It is also diverse. The tamale man sells still-steaming tamales from a cooler in his hatchback, mariachi music vies with bass in Bitter's neighborhood, and her coworkers swoop onto her homemade lumpia at the staff potluck. Spanish, Tagalog and American Sign Language vie with English as Bitter investigates murder and mayhem in Sacramento, California.

While Bitter Nights is a work in progress, you can read the complete short story Bitter Nights at my sneak peeks website, www.ruthdj.weebly.com. You can also read snippets of other stories I started before Bitter coalesced and demanded my full attention – well, between nonfiction writing gigs and my part time job.

A snippet from Bitter Nights - Chapter One:

Sapp's broad smile lit up his face when he saw Bitter arriving with the insulated carrier. "We were wondering if you were coming." He sniffed the air as he held the door open. "What did you bring this time? Homemade tamales, fried chicken, sarmi?" he asked hopefully.
In spite of herself, Bitter cracked a smile at his enthusiasm. "No. Papá's favorite, lumpia with sweet chile sauce, just the way Lola made it."
Sapp rolled his eyes in ecstasy. "No! You make lumpia too?"
"Aye, yes she does," O'Malley said from the break room, "and you'd best get out of the way before the stampede."
Bitter picked her way through the crowd of blues, taking a tray out of the carrier and setting it on the middle table with the rest of the potluck favorites. Behind her, she could still hear Sapp joshing with O'Malley about traditional foods.
"What, you don't have any traditional Irish foods?"
"None that you'd want to eat," growled O'Malley as he stared past the overloaded table into a shadowy corner.
Bitter paused and shrugged. O'Malley was always seeing ghosts in the shadows. Sapp leaned down, murmuring, "You should ride with him at night. If I hear one more time about him being the sixth of seven sons―"
Laden with a large silver coffeemaker, one of the dispatchers staggered into the room. Bitter couldn't remember her name. Maybe it was Candy. The high heels, flowing white dress and overdone makeup made her think of a perky young woman named Candy anyway. "Hey, hey, let me get that," someone said swiftly and several of the younger officers jumped to help her.
"Thank you," Candy said as they put the pot next to the industrial-sized coffeepot.
"What is it?"
"Oh!" She smiled. "It's chaga tea. You'll have to check it out, it tastes sorta like coffee. And it's organic," she finished brightly.
Turning away so Candy couldn't see his expression, Sapp gave O'Malley a quick side-eye, then sent an expressive eye roll in Bitter's direction. Just then, a huge platter of stuffed mushrooms arrived and Sapp started making a space on the main table.
"No, no, no, over there." Bitter pointed at the side table.
"What?"
"Allergy-producing foods go on that table. Peanuts, shellfish, mangos, and mushrooms go over there."
"Mushrooms? Who's allergic to mushrooms?" Sapp asked curiously.
She looked at him grimly. "Me."
Sapp sobered. "Really?"
"Yes, really."
Sapp looked down at her sympathetically, remembering that her ex-husband poisoned her once with shrooms, but didn't say anything more. He knew better.