Out of the Ashes; Lorraine Carey

Out of the Ashes 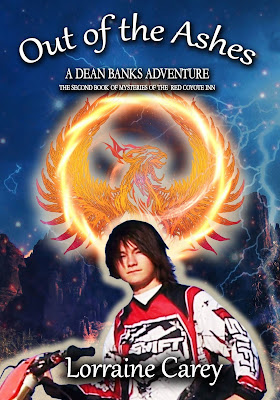 Out of the Ashes is a chilling paranormal tale and the sequel to Mysteries of the Red Coyote Inn. It can also be read as a stand-alone book. I wrote this story to inspire teens and young adults but it is  suitable for all ages.

Dean Banks is back and this time he is fighting an enemy, which must be destroyed in order to save the legendary Lost Dutchman Mine in Arizona and the sacred grounds in the Superstition Mountains from a powerful force, only he can overtake. Being summoned as the ‘Chosen One’ by the Apache gods to guard and protect the land was not how he intended to spend the rest of his days. He’s amped up with more superpowers and knowledge from the elders and guides that will prepare him for an unbelievable journey that may just be under his very own nose. Journey with Dean as he battles evil and is reunited with a lost love. Put on your seat belts! This novel is a Wild Ride, full of ghosts, ancient spirit warriors, shape shifters, magic and an unexpected twist of spiritual awakening for Dean and its readers.

~ Excerpt~
Dean Discovers the Mysterious Cave~
Dean glanced at his arms, which were about twice their normal size. This was a very different physical occurrence to when he shifted into his usual hawk form. He grabbed his talisman and gave another look at the large iron doors. He listened to voices and chanting going on behind them, and it only made his desire to burst through them more intense. What’s going on in there? The next minute he attempted to punch a hole through the door. He left a huge dent. He punched it again, creating a gaping hole and was able to walk into the room. He looked around and could sense whoever was in there was hiding, the familiar smell of the same reptile still lingered. Dean rubbed his eyes and tried to let his vision clear as his body cooled down. He looked at his arms and legs noticing they were almost back to their normal size.
Once his vision cleared, he noticed he was in the same room— the one with the operating table, medical vials and equipment with IVs hooked up to the operating table—fluid still inside the bags. Whoever was in here isn’t far away.
He walked over to the table and could see fresh blood and hypodermic needles displayed on a steel cart next to it. Gross! He walked over to the huge stone vaults in the walls that were covered in the weird hieroglyphics. He ran his hand over them and sensed a strong vibration ripple from his fingertips to his shoulder.
I wonder if these vaults lead to a secret passage? He was feeling lightheaded so he decided to sit down and try to take it all in. Dear God, don’t let me pass out in here!
He saw a faint glow coming from the back of the room, and it had his attention. The glow became more defined, and Dean could see it taking on the shape of the thunderbird. It glowed so vibrant, it almost blinded him. He tried to get up but wasn’t able to move. It was similar to the same force he had experienced in the cave when he’d had his vision quest. The next thing Dean heard was a voice calling his name.
“ Dean, you’re in the presence of evil forces. This is one that has been out there for many centuries. Keep your eyes wide open and know that you have the power from the ancients that are with you.”
“But Grandpa... wait! I need—”
As the voice of his grandpa disappeared, so did the thunderbird. Dean was able to sit up and finally get his balance. He could see the liquid in the gold vials glowing, so he examined one of the specimens. “I’ll find out what this is. I’m sure it has an evil presence about it.”