The Legend of the White Stag The story of the White Stag spread throughout the Northern Hemisphere, from Japan to the British Isles.

Turan people consider the deer sacred because on its antlers it carries the sun and the moon and leads the chosen people from darkness to light, from death to life, and from old to new homelands. 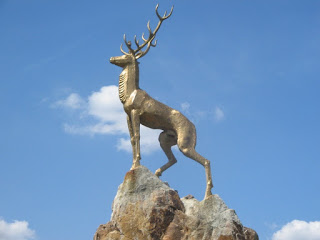 In Hun-Hungarian mythology, the miraculous deer is the most significant animal. The stag's antlers symbolize the world tree and people's relationship with the sky. The shedding and regrowth of the antlers symbolize the cycles of life, disappearance, and rebirth. The golden deer leads man back to the ancient wisdom. 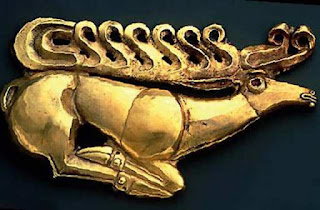 
According to Hungarian (Magyar) legend that was preserved in the 13th-century chronicle Gesta Hunnorum et Hungarorum by Simon of Kéza, while out hunting, two brothers Hunor and Magor saw a miraculous white stag (sometimes described as golden). They pursued the animal, but it always stayed ahead of them, leading them westward into Levedia, where they married two princesses and founded the Hun and Magyar people. One of the main reasons for claims of religious and cultural ties between Huns and Magyars is the stag and the brothers Hunor and Magor.

When I was researching Hun history for my trilogy, The Ancestors' Secrets, I came across this ballad that was translated from Hungarian that mentions the "doe with horns". It was confusing that the legend mentions "stag" a male deer, but this ballad specifically says female deer with horns (antlers) Later I've found a short article about it that explained the confusion. In Hun legends, the male and female represented equally recognizing feminine and masculine qualities and role in life. Female and male unite to bring forth life and nurture and protect it.

Read a short excerpt from Prelude, book one of The Ancestors' Secrets trilogy:

I always loved this legend. It was difficult to see the meaning of the legend behind all the symbolism, but when Dad had explained it once, it made some sense to me. He said, “The cosmos, the mother of the sun, is represented by a female horned doe, or hind. Being a symbol of the cosmos, she also carried the stars representing the people united. Just as the cosmos was her mother, she was the mother of the stag who symbolized the sun.”
“Rua, you’ve been telling us stories, but I never heard you mention anything about the four hundreds,” inquired Ema.
“There are many speculations, but nothing is known for certain. The legend says those were dark and uncertain times and that we might never find out what happened back then,”
Ema frowned, “Oh, you and your legends. Never a straight answer to anything.”
“I just tell the legends as my father before me.”
Ema sighed, annoyed, and started playing with the CD player. To match her mood, she chose Brahms and drummed the tune on her knees. Bela begged her to switch to Chopin, and when she did, everyone settled into a lazy mode. We listened to the music and enjoyed the beautiful late afternoon.
“Tell us more stories Rua,” begged Ema, turning to him.
“Okay, I’ll tell you a story about King Matyas,” Rua said as he sipped his coffee.
We all leaned back, ready for the tale. I always loved his stories about the wise and just king, but Ema cut him off before he could start the story, “But Rua, you told us all the stories about King Matyas already. Tell us why the falcon is so important in our history.”
“Well, according to the legend, the Turul is a messenger of the Gods. It sits on top of the Tree of Life or ‘Életfa’ along with the spirits of unborn children in the form of birds. When we are in need, the Turul stretches its wings over us, guides and protects us.”
Ema’s eyes turned sad and looked away, “It doesn’t protect everyone.”
“That’s true. It doesn’t protect individual people from life’s everyday cruelty. It protects us as a nation, all of us. Also, the Turul bird’s role is to protect the sword that appoints the King or Queen, who are proven to be worthy.”
“How can a mythical bird do that?”
“I don’t know, but the legend says that when the time is right, and the person is chosen, they hear the falcon’s victory cry and the flaming sword mark appear on their neck with the symbol of the King or Queen on their face.”
Ema sighed and shrugged her shoulders, “Oh, Rua, these are just legends.”
“Well, there is a small truth, somewhere, in every tale that’s told. Maybe it’s just a legend. There was not a Hunor who had the mark since the fourteen hundreds, so we can’t say if it’s true or just a myth.”
“Having a King or Queen is nothing but a show and symbolic representation nowadays. They don’t have the power to rule a nation like the ancestors.” Ema replied.
“That’s true…” Rua looked at Elza who touched his hand to warn him, and he didn’t finish the sentence.
Noticing the interaction, I said, “Elza please let him finish.”
Rua smiled, “There is nothing more to say. These are just legends.” 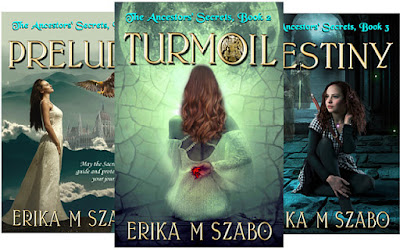 If interested, you can read my blog series about mythology and folklore:
COMMENTS

Love learning this legend. It's really interesting how different cultures embrace certain animals and each have their own unique symbolism. You really have done your research here.
+
5
4
5
·
Reply

Erika M Szabo
7 months ago
+
1
2
1
Indeed! I love researching legends that are a part of our rich cultural heritage.

What interesting mythology! You have researched so much and then used that information in the woven tapestry of your book. Bravo!
+
3
2
3
·
Reply

Thanks for this post. It is totally cool the way you weave the myths and legends into your stories. Totally cool stuff
+
3
2
3
·
Reply

I've seen many decpictions of the White/Golden Stag and many short stories and film. I always find it fascinating.
+
4
3
4
·
Reply

Erika M Szabo
7 months ago
+
1
2
1
The White Stag appears in the Harry potter books too, if I remember correctly, as Harry's patronus :)

Love the legend and the excerpt from your awesome book was great!
+
4
3
4
·
Reply

Thank you so much Cindy! Your kind words mean a lot to me!

What a wonderful story. I love the spirituality and symbolism of the white stag/doe. Enchanting.
+
4
3
4
·
Reply

Erika M Szabo
7 months ago
+
1
2
1
Yes, it is enchanting and this legend is a bit different in every culture :)

Erika M. Szabo​ shares more fascinating stories from Hungarian mythology. The white (or golden) stag that's really a doe in the ballad is a wonderful twist to the tale!

I love these posts about Hungarian mythology. The white, or golden, stag is a wonderful figure -- especially since the "stag" is a doe in the ballad. Thank you so much for sharing with us!

What an interesting post Erika. I love learning about new legends and myths. I find it fascinating that the Stag is described as a doe in the ballad. Thanks for sharing.
+
2
1
2
·
Reply

Erika Szabo shares the Legend of the White Stag in her series of legends on #OurAuthorGang. She also shares an excerpt from her Ancestor's Secrets series.
+
2
1
2
·
Reply

Today on #OurAuthorGang, Erika M. Szabo​ tells us about the legend of the White Stag, and gives us an excerpt from one of her fantasy novels.
https://asmallgangofauthors.blogspot.com/2018/06/mythology-and-folklore-part-4.html
+
3
2
3
·
Reply

I love learning the Hungarian legends/lore. Thanks, Erika, for bringing these to us.
+
3
2
3
·
Reply

Today, Erika M. Szabo​, continues her series on mythology by sharing the legend of the White Stag. #OurAuthorGang
+
4
3
4
·
Reply