Dragons come in all different shapes and sizes. There is no limit on what they can look like or the myths behind them. Every corner of the world seems to have their own legend. In the previous two posts I discussed dragons from Europe and China. Today I'll cover dragons even more foreign. Some would even argue that they aren't really dragons at all. I'll leave that decision to you.

For today's post first we'll travel to south east Asia. The dragons in this region share similar traits and origins but are very different from other parts of the world. The first dragon originates in India and spread to Indonesia and Cambodia changing slightly as it went.

This dragon is a great serpent called a Naga, or Neak. There is some argument that they should not be considered dragons since they more closely resemble large snakes. Many of them in fact have hoods like cobras. Most of them though are divine in nature and/or have magic. Depending on what part of the culture they are associated with they may have up to nine heads or appear in human or part human form. Others have more crocodilian features. One feature seems consistent through the countries and cultures Naga and Neaks are protectors and benevolent in nature. Many of them were associated with kings and some protected Buddha himself. These dragons typically live in lakes, rivers, ponds and caves.

For the next type of dragon we move to Australia where one common myth predominates the country. The common dragon here is called a wurm. The description is an uglier version of the great serpent. They have thick snake like bodies with a head like a horse or crocodile. They have large fangs, big eyes and some have horns. In addition to Australia they are also found throughout the UK, France and Western Europe. Unfortunately for wurms they have no redeeming qualities. They are always destructive and malicious towards humans. Luckily for us they have few supernatural abilities. They are only able to spew noxious fumes or flames. They are commonly found in swamps, marshes, or other wet places.

The last dragon for the day is found in the oceans and lakes of the world. The sea serpent is another class of dragons and Cetus is probably the most well known of his kind. While most would argue they aren't dragons there are enough people who would argue that they are to include them here. The description of sea serpents vary from sighting to sighting. Some claim they are up to 300 feet long with horse heads and mane and no appendages. While the next person may say it's only 30 feet long with arms, fish face, and seaweed like hair. The color varies from grayish to black. The only consistent feature are large eyes that are grey or blue. Sea serpents were known for sweeping men off deck into the ocean or into the water. They could also coil around a ship if big enough and crush it causing it to sink. They were feared by all sailors for hundreds of years.

If you would like to see how dragons inspire me please check out my dragon shifter romance series Dragons of the North and Dragons of the South. You can also find out more about me on my website, my page here, twitter, or instagram. 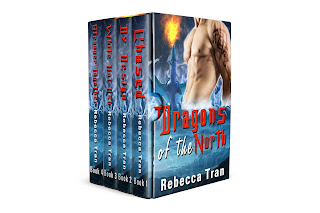