I Dare You to Write a Halloween Story: Part 3

Alan and Sandra accepted the challenge 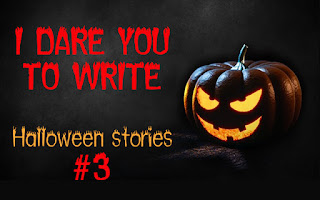 Erika challenged the authors in our Facebook group to write their own unique story by continuing after the paragraph she posted.

The first paragraph of the story:
John enjoyed the quiet evening with Mandy, his wife, and with his loyal dog, Honeydew, after the Trick or Treater children stopped knocking on the door demanding candy. Mandy fell asleep on the sofa and the golden retriever was dreaming on her pillow close to the crackling fire about something that made her kick and grunt in her sleep. John put another log in the fireplace and sat back on his rocking chair thinking about Hallows' Eve when the barrier between our world and the world of ghosts and spirits is thin. Anything could happen tonight, he thought closing his eyes. Suddenly, he heard Honeydew's soft growl. John looked at his dog and a chill shot through him. The dog stared at the dark corner with fright in her brown eyes, whimpered and moved closer to John’s chair putting her large head on his master’s lap.

Alan continued the story:
"You're such a coward, Honeydew," John stated softly, stroking the dog tenderly. "Afraid of nothing but a shadow."
"Well, you would be too if you knew and could see and hear all that I do," Honeydew replied.
Shocked, John Said: "Honeydew-you-you can talk!"
"Yes," Honeydew replied dryly. "And stop peeing in the toilet--I drink from there! … By-the-way, you're dreaming this. You fell asleep an hour ago. Happy Halloween." 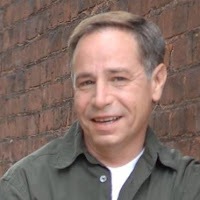 AMAZON
GOODREADS
FACEBOOK
After being a "struggling" actor in Los Angeles for many years, I returned home to St. Louis and turned to writing. I have had four novels published: I'm No P. I.; A Ghoulish Good Time; Murder, Vampires and Leprechauns and For They Shall Wait.
I have been a member of Goodreads for some years now, but for a year, in 2015, I was in a rehab house--my MS finally took its toll on my body. I'm back now; I know both physical and mental pain, and I need much laughter to endure it all. Hopefully, my novels do just that--give much laughter.

Sandra continued the story:
“What is it?” John asked softly as the dog pushed its head more firmly against her master and lifted a leg to hide her eyes.

As John peered into the corner an amorphous mass appeared to move languidly toward him. Frozen to his chair by dread and the large retriever’s mass, John tried to warn his sleeping spouse but no sound passed from his vocal cords through his parched lips.

As the mass grew ever closer he could only stare in horror. What was this silent specter, and from whence had it arisen? Why had it come, and what did it require of the silent man who watched it approach. Gliding ever forward it came to a standstill only a foot from John’s chair.

Quaking in trepidation, the intertwined smells of his anguish and that of the blob quite evident, John blinked as the ceiling light suddenly illuminated the room to reveal his two children, one of whom dropped a shimmering black cloth and smelled like a skunk.

“Got ya, Dad!” Loud guffaws trailed the boys as they scampered off to bathe away the noxious smell and spend the remainder of Hallows’ Eve gorging on their treasure trove of candy. 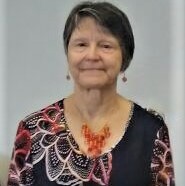 Sandra Novelly, twin, mother of 3, grandmother of 3 and great-grandmother of 1, was born in Northern Kentucky, moved to Florida in 1999, then traveled across the country in an RV with her husband, Larry, and two cats, Smokey and JR. They returned briefly to Florida, lived in Larry's hometown of St. Louis, MO., then Laughlin, NV, and now Larry, Sandy, Smokey and a new cat, Scotch (adopted after JR's sad demise), call Wilmington, OH home. Sandra has loved to read since age 4 and translated that love into writing. An author of 5 e-books so far, Sandra also took part in the anthology, Read for Animals, which is a loving collaborative project of stories, poems, and art by several writers, poets, and artists the sales of which go to benefit animal shelters. She currently works on other manuscripts and also makes handmade jewelry and gift items. 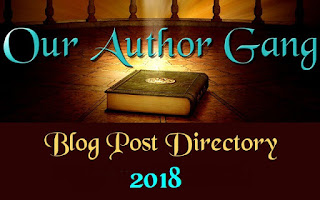 COMMENTS
Alan and Sandra accepted the Spooky Dare and have quite a tale to tell. Here's to more tales in the near future. I'm looking forward to seeing where this story will take us next.

Alan and Sandra take up the spooky challenge with their unique takes on the writing prompt. Check out their stories on #OurAuthorGang!!
+
1
2
1
·
Reply

Those are GREAT! Thank you!

IF you like Halloween decorationsThis perfect for you!
Wear it Proud, Wear it Loud!
to buy visit the link

Great spooky story. I loved the twist at the end.