You want to build a world for a story or series of stories. You have the general points sketched out and you are thinking about the map you need. You can, of course, draw it -- or generate it -- at any time. But let's consider a few aspects of the geography first.

Geography not also defines the shape of land masses, but also an area's climate and resources as well. If your world has a molten core like ours, then volcanoes are possible and the surface is can be made of sliding plates which determine where the mountains are, and the shape of each continent. It will also tell you where there are quakes (usually along fault lines where two plates abut). Make a map of the elevation and the fault lines. It will help you later.

The US Geological Survey web site provides such topological maps of the United States, which can serve as an example. Your maps don't need to be that detailed (remember Tenet 1) but you should note where there are mountains, hills, and flat areas. Remember to provide a transitional area between mountains and flat terrain. Often there are hills in between.

Also keep in mind some mountains have volcanoes hidden among them. And not all hills are grassy knolls. Some of forested and some are barren. You don't need to consider this in the elevation map but it is something to think about for later.

Once you have these detailed sorted out you are ready for the vegetation map. We'll consider that next time.

Elevation from My Fantasy World, showing mountains and lakes 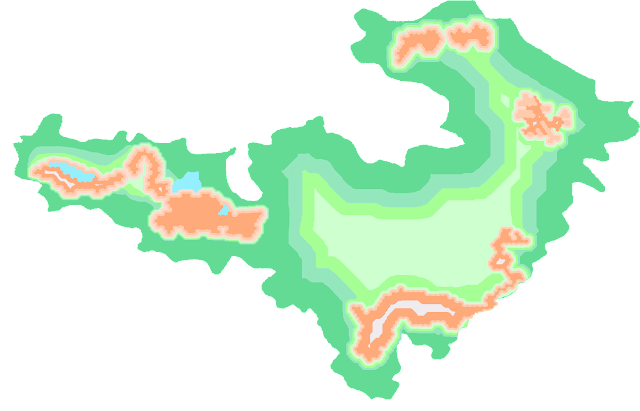