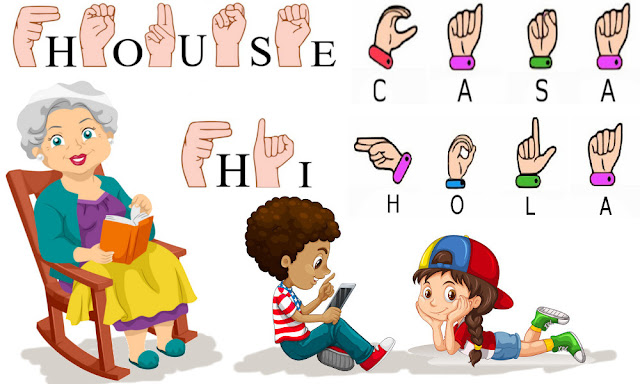 Look, I Can Talk With My Fingers!


When I was a young child we were having a family dinner in a restaurant. I remember watching a couple at the next table and I was mesmerized by what they were doing. They smiled at each other, their facial expression changed rapidly as they moved their lips but they didn't make any sound. They moved their hands and fingers as if they were doing a well-choreographed dance.

My mother touched my arm and whispered to me, "You know it's rude to stare at people, right?"

"What are they doing?" I whispered back.

"They're talking to each other."

"They're deaf," mom explained. "They can't hear, so they're talking to each other with sign language."

"Some deaf people are born that way and others get sick and lose their hearing."

"Why can't the doctor fix it?"

"Well, some people are not completely deaf and they can use a hearing aid, but others can't be fixed so they learn sign language to talk to each other."

I will never forget the mixed feelings that swirled in my mind and I kept asking my parents about what deafness might feel like. When we got home mom handed me two cotton balls and said, "Put these in your ears if you want to find out what it feels like."

I did and it scared me that all I could hear was my heartbeat in my head. I saw my dog moving his mouth but I couldn't hear his voice. My cat swatted at him with mouth wide open but I couldn't hear her angry hiss. It felt awful, I felt alone in the silent world and removed the cotton balls quickly.

My parents always said, "You don't know what other people are going through until you walk in their shoes, so when I was older, I wanted to "walk in a deaf person's shoes" and decided to live in silence for an entire day.

I put swimmer's earplug in my ears that blocked even the loudest sounds. It felt awful not to hear the everyday sounds that I always took for granted. After about an hour I started to feel a little claustrophobic as well and I couldn't keep the plugs in for more than a couple of hours.

These experiences inspired my first children's book. The story is about a compassionate and clever little girl who found the way to communicate with her hearing impaired grandmother.

Click on this link to read a few pages from the book:
http://online.flipbuilder.com/qvwg/mceq/

Find this book in your favorite store:
https://books2read.com/u/4jKZP2

Order a signed paperback in my BOOKSTORE

This book is also published in Spanish, click to read pages from the book
http://online.flipbuilder.com/qvwg/ylyq/

Find this book in your favorite store:
https://books2read.com/u/3neQ2K

Order a signed paperback in my BOOKSTORE

One of my friends purchased the book for her niece and she sent me a picture of her husband and his friend. Watch the short video with a heartwarming message.

I've found this very informative website about the history of sign language. It's so sad how badly deaf people were treated before it was understood what being deaf means.

Sometimes we need a reminder to enjoy more that we can see, hear, smell, touch and move freely without restrictions and limitations. It makes us understand a little better what others, who can't enjoy this freedom, must go through.

How did it make you feel when you met the first deaf person?

Today on A Small Gang of Authors, author, illustrator and publishing consultant Erika M. Szabo talks about very special subject: "signing," and how she came to write her children's book, "Look, I Can Talk With My Fingers."
https://asmallgangofauthors.blogspot.com/2017/06/talking-fingers-ourauthorgang.html
+
1
2
1
·
Reply

A wonderful written article. When I was younger a classmate of mine taught me how to sign the alphabet. I later learned a cousin in the family was deaf, which I honestly never knew because she had learned how to talk similarly to Helen Keller.

Erika M Szabo
1 year ago
Thank you Mackenzie! A lot of deaf people read lips and learn to talk very clearly. I met a young woman and I thought she spoke with a nice accent, but when I started talking and she watched my lips instead of making eye contact. That's when I realized that she was deaf.

Hearing impairment can come in many forms. I known of one girl who wasn't actually deaf, she could hear perfectly, but she suffered with Auditory Processing Disorder. Something between her hear and what her brain processed wasn't working and language came to her as a gibberish. she was in the regular school up until grade 7 or so, but she relayed too much on sign language that they had to put her into a special school to learn how to read lips and pick up on other non-verbal cues. With the Cochlear implants less hearing impaired people relay on sing language. I'm glad you put yourself or at least tired, in those shoes. I suffer from Tinnitus in my right ear and all I hear is humming all the time in that ear, but if the music is louder than the low hum, I can hear it just fine. It's a blessing in disguise because if there is any kind of noise I turn on my good ear and I block the sounds and can go to sleep. Doesn't work on my husband's snoring though.
Read more

Erika M Szabo
1 year ago
There are so many types of hearing impairment, the link I added is a great website to find information. Sorry you suffer with tinnitus and it's great that you can look at it on the bright sire :) My father snored, and when I was a young kid, I could hear him from two doors down behind closed doors. Now I know he must have had sleep apnea, but he was never diagnosed.

Fantastic post, Erika. Very insightful and a wonderful concept for a book. In the UK there is a BBC children's program called 'Something Special', which teaches basic sign language to children under 7.

Erika M Szabo
1 year ago
Thank you Mary Anne! That's a wonderful program! Maybe there is one in the US too, I don't watch TV often

Wonderful concept that combines compassionate understanding with a commercial, niche-market practical function. Kudos for this creation, with a special thumbs-up for seeing and filling an overlooked literary need at the kid-lit level.

Erika M Szabo
1 year ago
Thank you Ted! Although this book is not about popular topic for children such as princesses and pirates, hopefully the story will deliver the message to be compassionate to others.

Very heart-warming indeed, Erika! Sign language was something I never learned. I grew up with a deaf kid, whose name was also Joey. He could read lips better than I can hear! "Look, I can Talk with My Fingers" is a very special book, and much-street cred to you for writing it.

Erika M Szabo
1 year ago
Thank you Joe! Joey was lucky and sounds like he grew up with kids who accepted his disability. Unfortunately a lot of children have to face isolation and even ridicule. Hopefully, children who read my book will have better understanding of hearing impairment and accept others who happened to be deaf.